The Wicked Lady / one sheet / USA 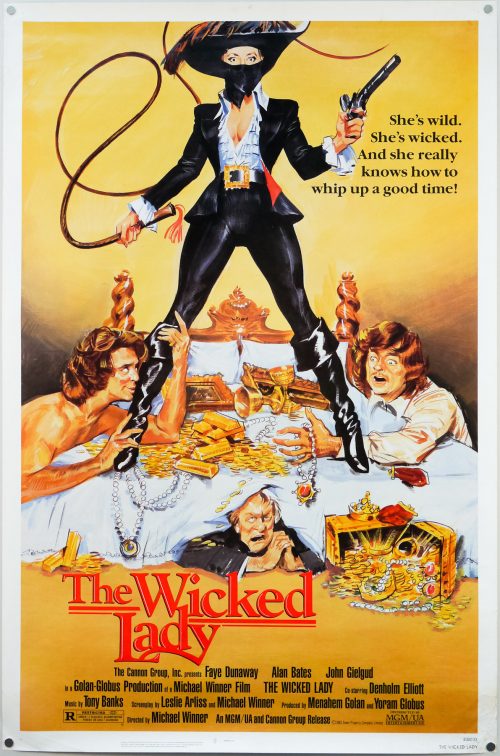 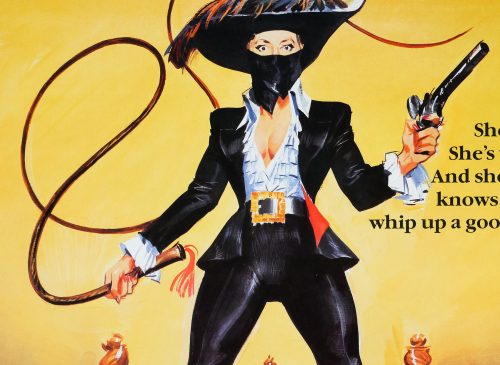 Tagline
She's wild. She's wicked. And she really knows how to whip up a good time.

The Wicked Lady is a period drama that was directed by the late Michael Winner and was based on the 1945 film of the same name. Faye Dunaway stars as Barbara whose sister Caroline (Glynis Barber) is due to marry wealthy landowner, Sir Ralph Skelton (Denholm Elliott). Seemingly devoid of any scruples, Barbara seduces Ralph and takes her sister’s place at the wedding. She soon grows bored of just being the wife of a wealthy man and decides to take up highway robbery, depriving wealthy coach travelers of their jewels and other trinkets. Eventually she meets and falls in with a real highway robber, Jerry Jackson (the late Alan Bates), and the pair step up their game by robbing gold bullion-filled stage coaches. Eventually their sloppiness catches up with them and people around Barbara begin to suspect she has some involvement in the robberies.

The film was a critical and commercial failure and was compared unfavourably with the original film. Dunaway’s character is totally unlikeable and her performance is nothing short of bizarre. Perhaps the worst aspect of the film is the pointless nudity, including one really cringeworthy sex scene by a fire, with a stockings removal setup that’s tortuously long. You can practically hear the sleazy Winner rubbing his knees at the back of the set. Despite a strong cast on paper this is a squandered opportunity.

I’m unsure who is responsible for the art on this American one sheet so if you have an idea please get in touch. It’s not to be confused with the artwork that was used elsewhere around the globe, including the British quad, that was painted by Brian Bysouth. 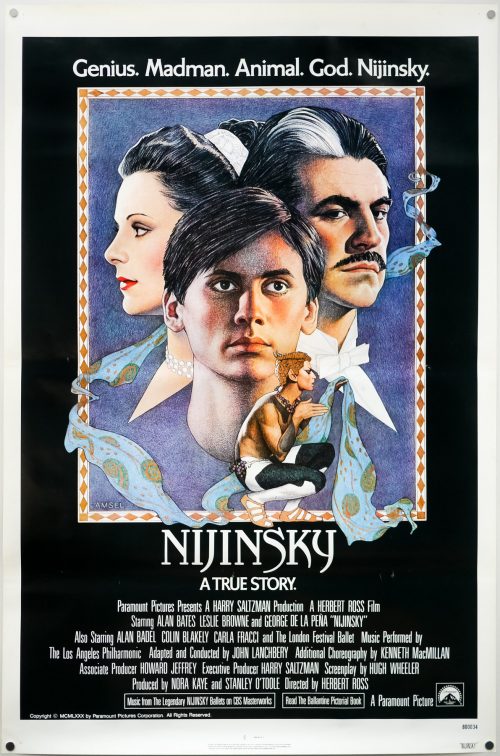 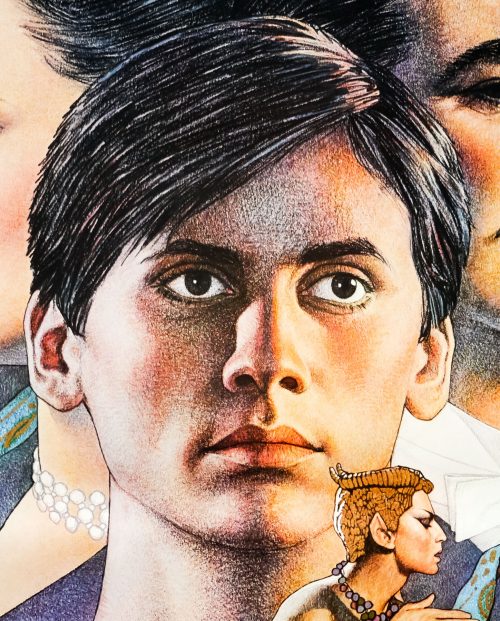 Richard Amsel artwork features on this one sheet for the release of the biographical drama Nijinsky. The film tells the story of the celebrated Russian ballet dancer and choreographer Vaslav Nijinsky who was born in 1889 in what is now Kiev, Ukraine and died in 1950 in London, England. Often cited as the greatest dancer of the 20th Century he was celebrated for his virtuosity, his ability to dance en pointe and his gravity defying leaps. The film was based on the dancer’s personal diaries and the 1934 biography that was written by his wife Romola de Pulszky. It was directed by the late Herbert Ross, a sometime actor, choreographer, producer and director who is perhaps best known for Footloose (1984).

The plot is described thusly on IMDb:
Set in the early 1910s at a time of passionate artistic experimentalism, and based on biographical fact, this is the story of Vaslav Nijinsky, the young and brilliant but headstrong premier danseur and aspiring choreographer of the Ballets Russes. The company is managed by the famous Sergei Diaghilev, himself a controlling and fiercely possessive impresario. The increasing tension between these powerful egos, exacerbated by homosexual desire and jealousy, becomes triangular when the young ballerina Romola de Pulsky determinedly attempts to draw the increasingly mentally unstable Nijinsky away from Diaghilev.