Godzilla vs Biollante / B1 / Japan 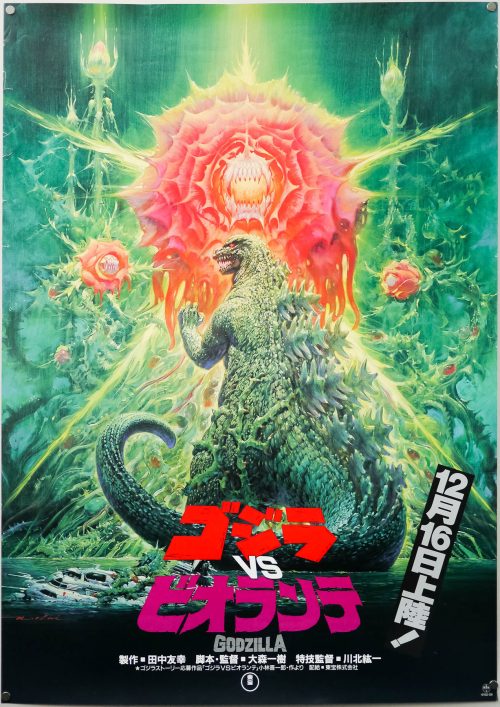 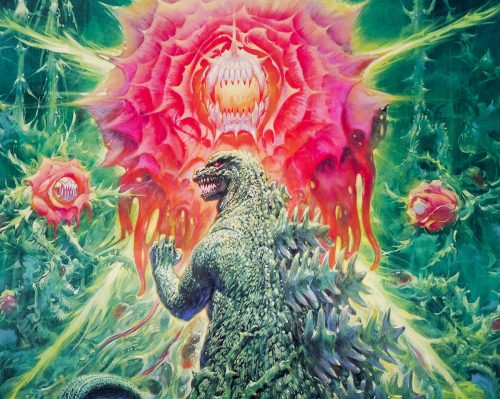 A colourful montage on this Japanese B1 poster for Godzilla vs Biollante, which was the 17th film in the series featuring the King of the Kaiju (giant monsters). The film was also the second release in the second generation of Godzilla films, which were part of the Heisei era of Japanese monster movies (daikaiju eiga). The eras are named after the Japanese emperor at the time, so the first generation of Godzilla films were part of the Shōwa era.

This film was the belated follow up to the 1984 series reboot, Return of Godzilla, and the concept for the film was actually the result of a fan competition to decide the plot, which had seen Shinichirô Kobayashi, a dentist and part-time scriptwriter, emerge as the winner. His script was heavily altered before filming began. Considered something of a box-office failure, Godzilla vs Biollante features the legendary beast facing off against a brand new foe that hadn’t featured in the franchise before and this was used to excuse its poor showing. Toho would return to familiar enemies in the films that followed in the franchise, such as 1991’s Godzilla vs King Ghidorah.

In this film, which follows on from events in ‘Return of…’, a team of American paramilitary soldiers working on behalf of a US genetics company attempt to collect material left over from Godzilla’s last attack on Tokyo. Whilst escaping with a sample, the team are attacked by a mysterious lone operative and the material is stolen. Meanwhile, Genshiro Shiragami, a Japanese scientist working in the Middle East, is about to return home with his beloved daughter Erika when a terrorist strike destroys his lab and kills Erika. Five years later, a grief stricken Shiragami is working on experiments for the government to try and develop a way to defeat Godzilla should he return. What his benefactors don’t realise is that Shiragami has also conducted a secret trial in which he combined the cells of Godzilla with those of a rose (the psychic energy of which he has also been studying) and the cells of Erika. The result is a creature he calls Biollante, and before long Godzilla is released from his volcano prison and heads straight for a confrontation with the new kaiju.