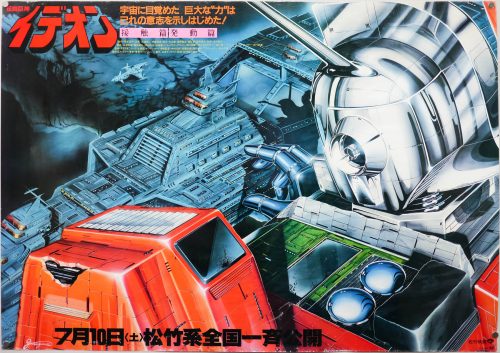 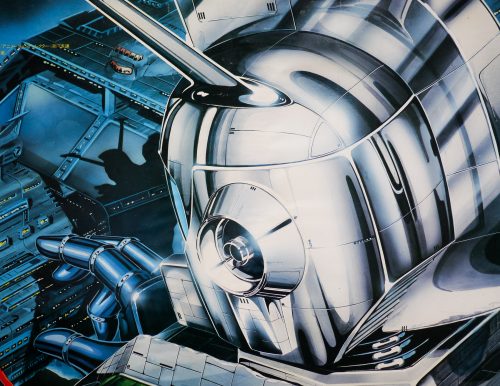 This is the Japanese B1 for the release of the second film based on the anime TV series Space Runaway Ideon that was created and directed by Yoshiyuki Tomino, who had previously  worked on the legendary anime Mobile Suit Gundam. Never given an official Western release (to the best of my knowledge) the series plot is summarised on its IMDb page:

It is the year 2300 and on the distant colony world of Solo, a team of archaeologists discover three alien vessels that, when formed together, become a giant fighting robot – The Ideon. However, they come into contact with an alien race known as the Buff Clan, who claim the Ideon’s energy source of Ide as their right. A simple case of fear and mistrust triggers an intergalactic war, with the Ide and the fate of the universe at stake.

According to the series’ Wikipedia page ‘the series originally met with rather low ratings and was cancelled after only 39 of its scheduled 43 episodes aired. As a result, the producers were forced to insert a short segment at the end of the final episode that ended the series in the middle of the action. Demand for a release of the final unaired episodes followed the show’s cancellation, and two movies were produced to end the series.

The two movies, A Contact and Be Invoked, were produced by both Sanrio and Sunrise and released as a double bill by Shochiku in 1982. A Contact featured clips from the first 32 episodes of the TV series interspersed with newly animated footage. In addition a few new scenes, the movie also created new death scenes for character such as Damido, Mayaya and Daram. Be Invoked featured a modified version of the final episode of the TV series (removing the ending sequence), in addition to those episodes that never aired, finishing off the Ideon saga once and for all.’

There is a signature on this art but I can’t read it so if anyone has any idea who should received credit for this please get in touch.