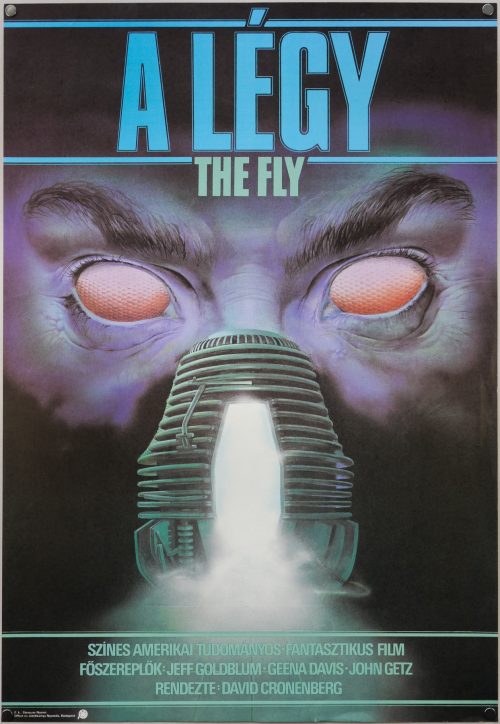 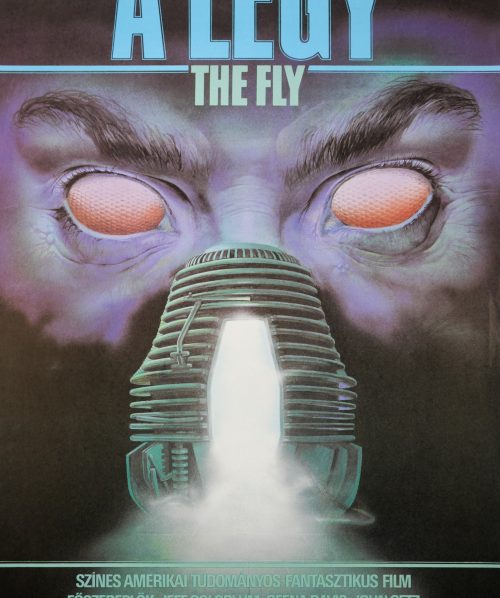 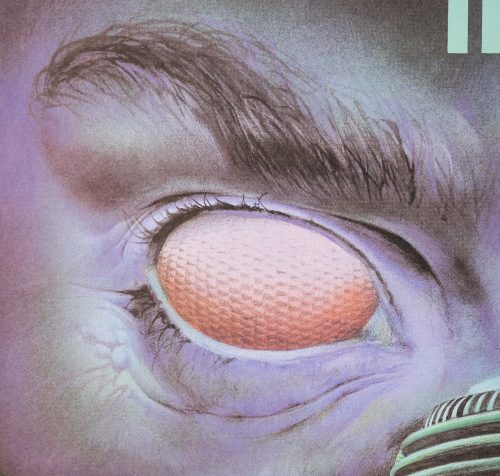 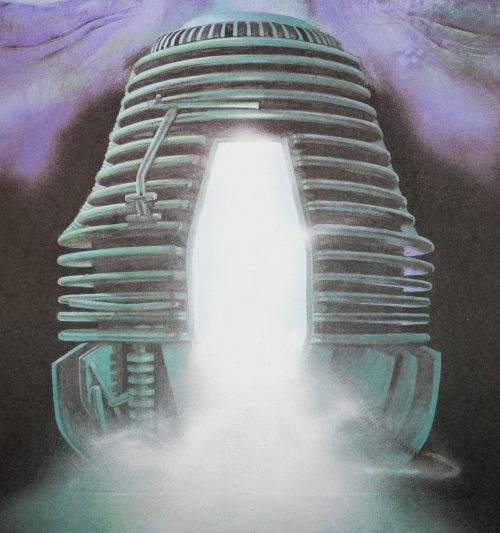 Unique artwork features on this poster for the Hungarian release of David Cronenberg‘s sci-fi classic, The Fly. Loosely based on a 1957 short story of the same name by George Langelaan, which was first adapted for the big screen in 1958, the screenplay was written by Cronenberg himself and based on an initial draft by Charles Edward Pogue. The director rewrote most of the characters and dialogue and added themes of identity, sexuality and body horror with which he’d become synonymous.

Cronenberg cast Jeff Goldblum as the gifted but eccentric scientist Seth Brundle who has secretly been working on teleportation of objects from one place to another instantly. He works for Bartok Science Industries but has been working on a pair of ‘telepods’ at his home laboratory. When he’s introduced to the journalist Veronica Quaife (Geena Davis) at a ‘meet the press’ event he decides to risk taking her to see his work, which he demonstrates by teleporting inanimate objects. Impressed, Veronica agrees to keep quiet in return for exclusive rights to the story.

Soon afterwards the pair start a romantic relationship as Brundle continues to work on the pods. He decides that he wants to have the pods teleport living tissue and eventually manages to do so successfully with a baboon he’s borrowed from his company. Flushed with success Brundle begins drinking and starts to get paranoid that Veronica has rekindled her relationship with her editor and former lover Stathis Borans John Getz. He decides to try teleporting himself but unbeknownst to him a housefly gets inside the pod with him.

He emerges in the other pod seemingly fine and initially feels he’s come out of the pod an ‘improved’ human with higher strength and stamina. However over the following weeks Brundle’s mood becomes highly erratic and he begins a bodily transformation that starts out with unwanted hairs and fingernails falling out but begins to progress into something much more destructive as he realises his pod had been contaminated. The transformation into ‘Brundlefly’ sees the scientist scrambling for a cure before it’s too late, desperately imploring a pregnant Veronica to help him.

Goldblum’s performance was rightly celebrated and it remains one of his most memorable roles to date. The special effects depicting Brundle’s deterioration were executed by Chris Walas‘ company and ended up rightfully winning an Academy Award. The film is as impressive as it was 30 years ago and is definitely one of Cronenberg’s best.

The artwork on this poster depicting a malevolent creature with fly eyes was painted by an unknown artist and also features the telepod that appeared on the US one sheet (though minus the fly’s leg). If anyone has any ideas who was responsible for it please send me an email.