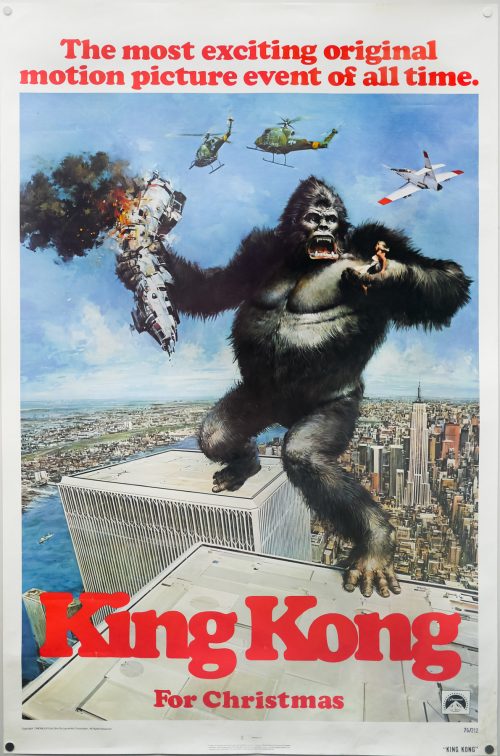 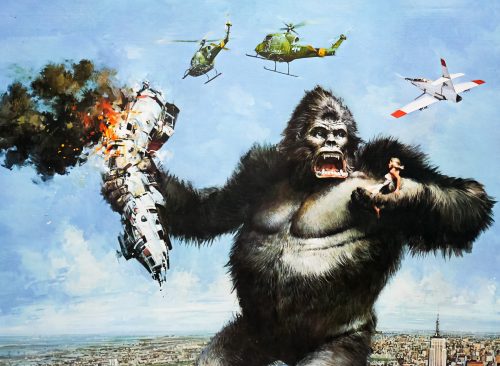 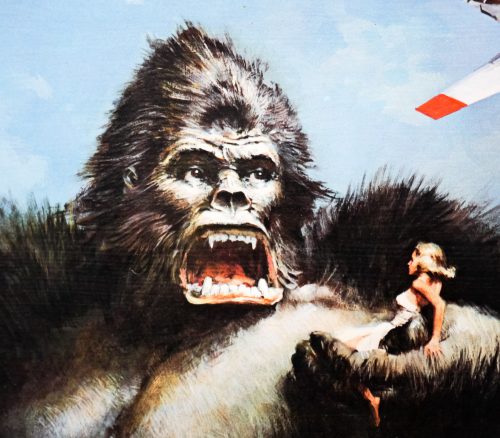 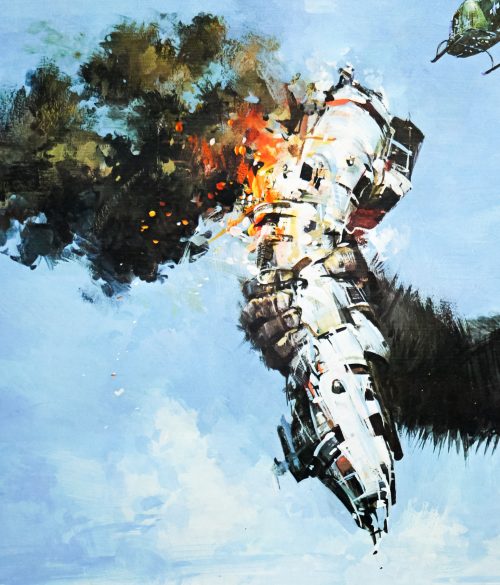 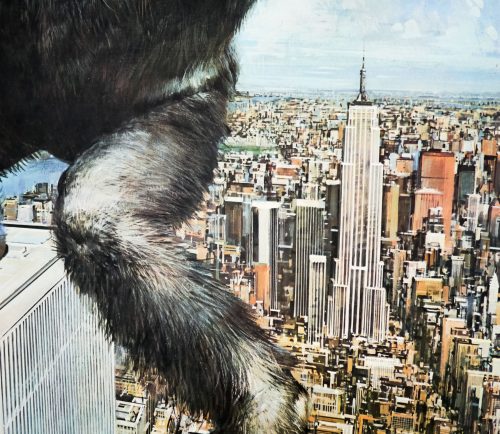 Tagline
The most exciting original motion picture event of all time.

Great artwork by the late American artist John Berkey features on this teaser one sheet for the release of the 1976 remake of the 1933 classic, King Kong. Legendary Italian producer Dino De Laurentiis conceived of the idea of remaking and updating the original. He worked with the screenwriter Lorenzo Semple Jr. (Batman the TV series, Flash Gordon) – a regular collaborator with the producer – and asked for the script to be more light-hearted than the original version. British director John Guillermin, who had seen great box-office success with The Towering Inferno a couple of years earlier, was given the director’s job. The two leads were a young Jeff Bridges and the stunning Jessica Lange in her debut role – De Laurentiis had spotted her modelling and asked her to audition. The rest of the cast is filled with respected character actors, including Charles Grodin, John Randolph and Ed Lauter.

The film follows the overall plot of the original fairly closely, although some of the details are updated to reflect its contemporary setting and the special effects are no longer stop-motion. An American oil company sets sail onboard a research vessel to find a mysterious, f0g-shrouded island that has long been rumoured to exist somewhere in the Indian Ocean. Jack Prescott (Bridges), a primate paleontologist stows away onboard and eventually reveals himself to exhibition leader Fred Wilson (Grodin) and the rest of the crew. As he’s about to be put into lock-up, Jack spots a life raft drifting in the middle of the ocean and the crew discover an unconscious woman. Dwan (Lange) is apparently the sole survivor from a yacht that exploded and killed the rest of the passengers. After she wakes she’s told of aim and destination of the ship that has rescued her.

After discovering the island, several of the crew venture inland and encounter a primitive tribe carrying out some kind of ritual near a giant wooden wall. After returning to their boat when the natives charge them, the crew pauses to rethink their plans. In the darkness of night, a canoe full of natives steal Dwan from the ship and take her to the wall where she is prepared as an offering to Kong. The beast takes her to his lair in the jungle where he spends a while ogling over her. Jack and some of the other crew manage to track her down but not before Kong offs several crew members and a giant snake. Eventually, Kong is subdued using chloroform and a giant pit and Fred Wilson decides to salvage the exhibition by transporting the ape back to America onboard an oil tanker. Needless to say, he doesn’t stay captive for very long when he reaches New York, and soon Kong is climbing the Twin Towers with Dwan in his hand.

De Laurentiis had hired both Carlo Rambaldi (most famous for E.T.) and Rick Baker (An American Werewolf in London) to work on the special effects for the creature, and the result was Baker himself wearing an ape suit in the majority of shots. A giant mechanical version of Kong was built but wasn’t ready in time for many of the shots and had severe issues when it did finally appear. Only about 15 seconds of the mechanical version survive in the last cut of the film. Baker was apparently displeased with the final version of the suit and it’s arguably what dates the film most when viewed today. There’s also some terrible rear-projection scenes, which were shoddy even in 1976. In some ways it might have been better to film using stop-motion animation, which was still being employed by the likes of Ray Harryhausen, even in the latter half of the 1970s, but the production must have decided that audiences were tired of that style of creature effects. Critics weren’t kind to the film at the time of its release but it still performed well at the box-office, thanks in part to the significant amount of tie-in marketing campaigns that De Laurentiis set in motion.

This teaser one sheet artwork was actually one of several painted by John Berkey for the film, and depicts Kong at the top of the World Trade Centre, clutching a destroyed helicopter as a jet buzzes him. This painting was actually updated later and replaced the helicopter with a jet, as well as adding a shadow beneath Kong. It can be seen on one of four Japanese B2 posters that featured Berkey’s artwork. Other posters for the film, painted by Berkey can be seen via this emovieposter archive link. The artist is perhaps best known for his science-fiction artwork which graced hundreds of novels from the 1960s into the 2000s. This page features links through to many of the covers. His estate has a website on which it sells both original artwork and prints of his art, primarily focused on his space-based paintings. It’s well worth a look to see the quality of his artwork.

Born in 1932, Berkey lived in Minnesota and spent most of his career as a freelance artist. He worked on a few film posters over the years, including one for Star Wars that appeared inside the vinyl soundtrack, as well as the poster for The Towering Inferno and one for another De Laurentiis creature-feature, Orca. The emovieposter archive features lots of his posters. The artist sadly passed away in 2008 from heart failure but he leaves behind an incredible legacy of artwork.

To see the other posters I’ve collected by Berkey click here.