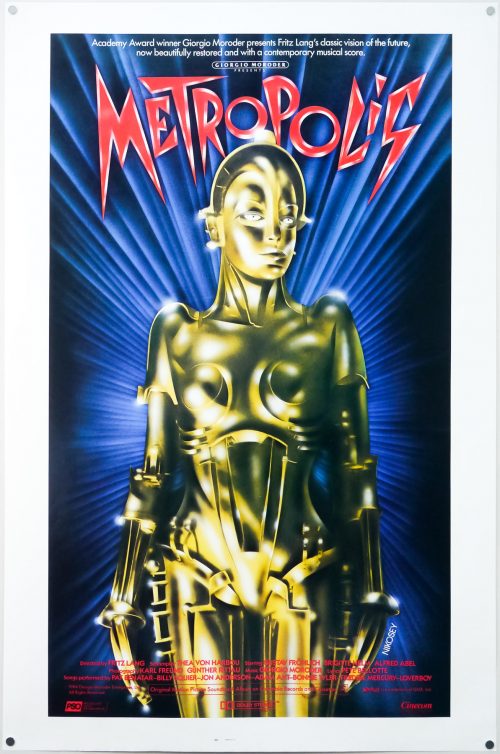 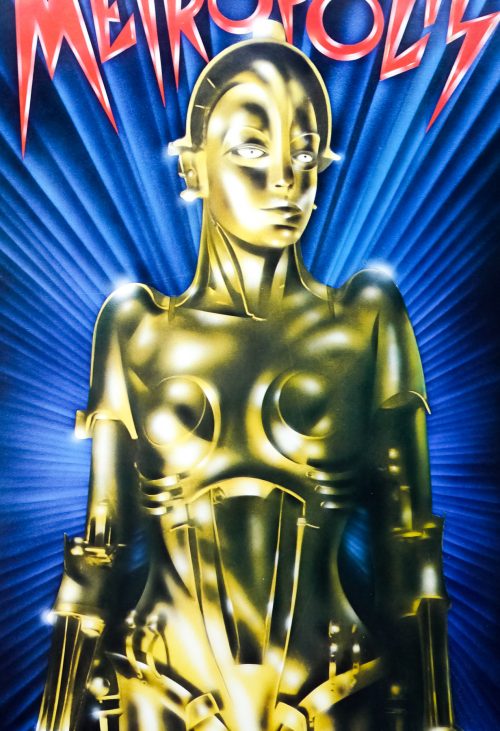 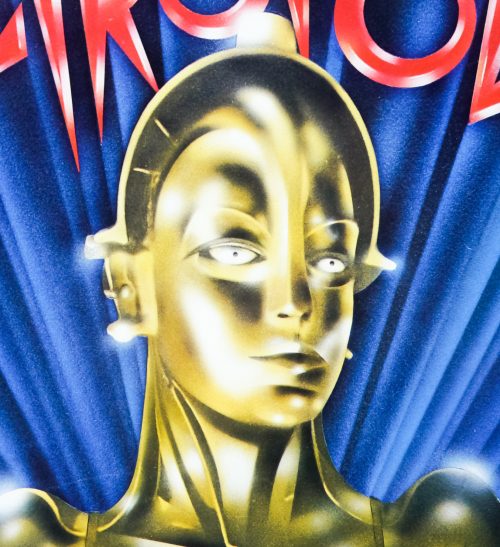 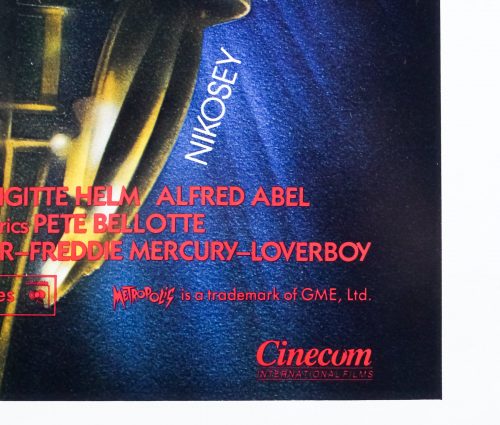 Fritz Lang’s 1927 sci-fi masterpiece Metropolis was given a cinema re-release in 2010 after missing scenes, long thought lost, were discovered in an Argentinian museum and reintegrated back into the film. 26 years earlier, music producer Giorgio Moroder produced and released an alternative version of the film which was restored and had various scenes that were missing from the first US release reinserted back in.

Controversially, Moroder also replaced the original orchestral score by Gottfried Huppertz with contemporary rock and pop music from the likes of Pat Benatar, Bonnie Tyler, Adam Ant and Freddie Mercury. Despite the heated debate that this re-release provoked it did have the benefit of bringing the film back into the public consciousness and led to further restorations over the following years. The discovery of the lost footage in 2008 was a complete revelation and brought the film very close to its original release version, which many feared was lost forever.

This one sheet was designed and illustrated by the American artist and designer Tom Nikosey who has been working since the 1970s and has created hundreds of iconic logos, posters and music album covers. Originally from Brooklyn, New York, Nikosey moved to Los Angeles in 1972 and began working heavily for the music industry, designing covers for artists such as Eric Clapton, Commodores and The Bee Gees. He’s also worked on hundreds of iconic logos, including ones for American sports teams, the NFL Super Bowl and multiple entertainment companies.

I was contacted by Tom in late 2018 and he was kind enough to answer some questions I had about his career and the creation of this poster. The questions and answers are below:

Thanks for agreeing to answer my questions. Can I ask how your career progressed once you settled on doing art and design for a living?
Very quickly in those days. After graduation from Art School in 1972 I ventured west to Los Angeles. I got my first job at a newspaper then a couple of advertising agencies as an assistant designer. After later being laid off work in 1974 I started freelancing and by 1975 I had started Tom Nikosey Design.

Had you done any work on film posters before Metropolis?
Not really as I’m mainly known as a lettering/logo artist. Over the years I did logos for ‘Prizzi’s Honor’, ‘Labyrinth’, ‘Flight of The Navigator’, ‘Adventures in Babysitting’, ‘Sgt.Pepper’s’ (the Bee Gees film), ‘Corvette Summer”, ‘Hooper’, ‘Pure Country’ but never the complete poster.

What was the sequence of events that saw you become involved in the Metropolis release? Was it an enjoyable project?
I met Giorgio through my friend Richie Zito the great music producer. I went on to create logos and graphics for all of Giorgio’s music projects and branded his recording studios in North Hollywood. When the project came together he asked me to create the posters for his re-release of Metropolis. There are actually two posters; the first one I created was for the international release of the film, then I did another version of the poster intended for the soundtrack double album cover fold out, which was what became the official one sheet.

Did you have many interactions with Giorgio Moroder himself?
Many and we’re still in touch.

Very cool! Were you given a specific brief for the poster? Was there another designer involved or were you working alone?
No, Giorgio gave me free reign creatively.

How long did it take for you to settle on the final artwork?
Actually rather quickly. After the teaser version which was used for the international release, I then created the soundtrack/one sheet version. The international poster won the Hollywood Reporter award that year for Best Foreign Film Poster.

What happened to the finished artwork after it had been copied for print?
Someone stole it. It breaks my heart to this day. Probably from the color separator or printing shop back then. Giorgio doesn’t know what happened either.

Did your work on the poster result in more film-related commissions?
Not sure, probably not.

What have you done since then and are you still actively working?
I’m still working. Metropolis was in 1984 and I was 33 when I created that piece. That was 34 years ago and I’ve done many, many projects since then.

By the way, I came across some images in my collection related to Metropolis. The first one (see here) is the info on the first ‘teaser’ poster that was used as the International release that American Film Magazine referenced. The second one (see here) has a very small thumbnail sketch that I did to show Giorgio how I was intending to create a ‘fold out’ album cover image for the Metropolis soundtrack LP. Along with this is the printer’s proof for the Soundtrack Cassette package. I thought these would interest you.

Thanks so much Tom, I really appreciate you taking the time to answer my questions.
You’re very welcome, thank you!

Tom’s official website features galleries of his excellent work. The Album Cover Hall of Fame website also features a two-part interview with the artist that is well worth reading.

Queen’s music video for their song ‘Radio Ga Ga’ was released at the same time as Moroder’s version and featured footage for the film.

As well as the original restored film, the Moroder version was released on blu-ray in 2011.

The original trailer for this version of Metropolis is on YouTube.