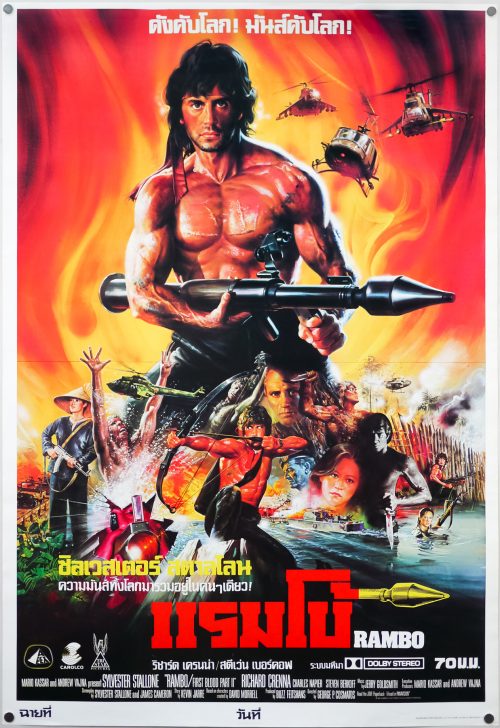 Tagline
No man, no law, no war can stop him.

This is the Thai poster for the release of the follow up to the action classic First Blood (1982). Coming three years after the original, Rambo: First Blood Part II – note the addition of the character’s surname to the title – had a script that was co-written by James Cameron and Sylvester Stallone. George P. Cosmatos was chosen to direct the film and the legendary partnership of Mario Kassar and Andrew Vajna, who were behind many of the best action films of the 1980s and 90s, were executive producers.

The film picks up where the original left off, with ex-commando John Rambo (Stallone) serving time in prison for the events of the first film. His former commander Colonel Trautman (Richard Crenna) visits him whilst he’s cracking rocks in a quarry with other prisoners and asks him if he’d help with a mission to locate MIA / Prisoners of War (POWs) in Vietnam. The public believe there are still American soldiers out there in the country, despite denials by the US and Vietnamese government. This was a very topical issue in the early 1980s and First Blood Part II was one of the first films to tackle the issue directly. Promised a pardon for his previous actions, Rambo accepts and travels to Thailand from where we he will be covertly dropped into Vietnam. He’s given orders that it’s just a reconnaissance mission – photographs can be shot but nothing else.

During the parachute drop things go awry when his parachute is caught in the door of the plane and he’s forced to cut away his bag of equipment before managing to untangle himself. Landing with only a large knife and a fold-out bow, Rambo manages to meet up with his contact Co-Bao (the stunning Julia Nickson) who helps him locate the camp in which it’s believed the prisoners may be held. Sneaking in during the night, he locates the American prisoners and breaks one out of the camp, intending to rescue the others with more support. The trio head to the pre-arranged rendezvous point with the Vietnamese guards in hot pursuit. Desperately trying to climb onto the rescue helicopter, they discover that the government agent overseeing the mission, Marshall Murdock (Charles Napier), orders his men not to pick them up. The whole thing was intended as a kind of PR mission to appease the American public angry about the POW situation. Murdock incorrectly believed that no prisoners would be located.

Rambo and the prisoner are captured by the Vietnamese and returned to the camp whilst Co-Bao manages to escape. They soon discover that the Soviets are arming and training the local soldiers. They meet the local commander, Lt. Col. Podovsky (Steven Berkoff) and his henchman Sergeant Yushin who torture Rambo and force him to disavow the POWs over the radio. When they threaten the life of a prisoner and Co-Bao attacks the hut in which they’re in, Rambo seizes his chance, rampaging out of the camp with Co-Bao following. The Russian and Vietnamese soldiers soon realise they messed with the wrong man as he proceeds to kill them one by one in a famous sequence during which the body count rises into the 70s.

The film was critically mauled on release but was a huge box-office hit, being the first film released in America to open on over 2000 screens. It accrued several times its original budget with a worldwide take of north of $300m. First Blood Part II is one of the defining action films of the 1980s and has been much imitated and parodied (particularly by Charlie Sheen in Hot Shots! Part Deux) since. A far less successful sequel would follow three years later before the series took a long hiatus prior to being resurrected in 2008 with Rambo.

The artwork on this poster is by Tongdee Panumas who was an incredibly prolific film poster artist during the 70s, 80s and 90s. I’ve been unable to find out much about him, other than that he was born in 1947, so if anyone has any more details please get in touch. The central image of Stallone holding a bazooka was redrawn from the photograph used for the American one sheet, which can be seen here.

Note that the dark line seen across the centre of the poster is actually where two painted canvases have been joined together by the artist – the art was then copied and the text and other details overlaid.