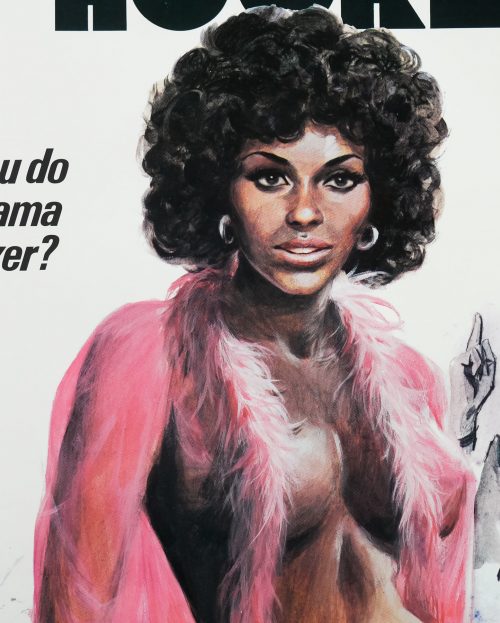 Tagline
She was lovable... She Was Mean.... Damn mean! | What would you do if your mama was a hooker?

They sure don’t make, title or market them like this anymore! Black Hooker is an obscure 1974 drama that was written, produced and directed by a man named Arthur Roberson whose sole film credits are all for this film (according to IMDb he also did the production design, art direction and set decoration). Seemingly only released in the States, the reason for its obscurity is explained in the reviews section of its IMDb page. In 2004 a reviewer with the handle ‘spropes’ wrote the following:

‘When I worked with L.A. County, I knew Art Roberson fairly well, tho I have no idea of his current status or whereabouts. We were both social workers in the ghetto (really) in the 1970s. My impression was that being a social worker was his day job, that being a movie maker was his primary ambition…so what else is new? The movie, some interiors of which were shot at the legendary Joe Jost’s in Long Beach, premiered for friends and associates at Warner Bros. screening room in Burbank. At the end of the showing, it was greeted by dead silence, replacing excitement or applause.

I think the viewers realized that the director had blown a pretty good chance to do something worthwhile after all his work, investment and attention to this film. Originally entitled something like “Don’t Leave Go My Hand” (or maybe “Don’t Let Go My Hand”), it was supposed to sensitively portray the horrible life of a neglected (or abused, I don’t recall which) black child, the son of a…you guessed it…black hooker! But that original intent didn’t play, so the title was changed to “Black Hooker,” presumably to piggyback on the blaxploitation movement at the time.’

This would explain why the film has several alternative titles and why it is often listed as a blaxploitation film despite the storyline having barely anything in common with other entries in the genre. Another reviewer sums up the film thusly:

‘Whatever the hell this is, it is quite the mean-spirited, uncomfortable little obscurity, which caters only to collectors of the most obscure B-cinema available. A hostile, impersonal story, with zero light at the end of the tunnel. none of the characters even have names. What kind of director makes a movie like this? A director who didn’t have a very happy childhood, that’s who. I mean, this isn’t exactly Cannibal Holocaust, or I Spit On Your Grave, or anything like that, but Black Hooker is just hateful.’

I have no clues as to who is responsible for the design or artwork of this one sheet and I doubt I’ll ever be able to discover who should be credited with it, but if you have any ideas please get in touch.