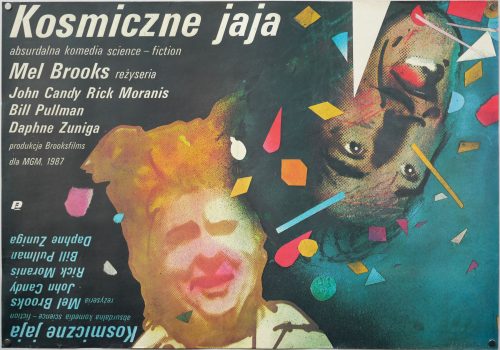 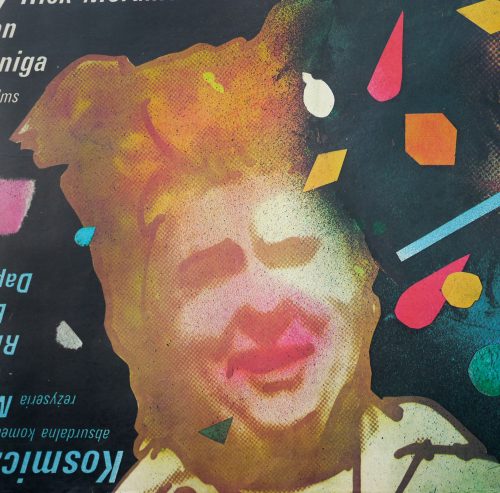 Wild artwork by Maciej Buszewicz features on this Polish B1 poster for one of the all-time great parody films, 1987’s Spaceballs. Helmed by the legendary comedian, actor, director and screenwriter Mel Brooks, who was responsible for several other entries in the genre, including Blazing Saddles (Westerns) and Robin Hood: Men in Tights, Spaceballs set out to send-up the sci-fi genre and did so with great success. Star Wars is the main film in the firing line, but the Star Trek series, Planet of the Apes and even Alien all receive their share of the lampooning. Brooks struck a deal with George Lucas to be able to spoof the original trilogy and even employed his Industrial Light and Magic to handle the alien creature design, as well as asking other companies owned by him to work on post-production of the film.

The story begins on the titular planet Spaceball which is rapidly running out of breathable air. The incompetent President Skroob (Brooks himself) hatches a plan to steal the air from neighbouring planet Druidia by kidnapping the daughter of its King Roland, Princess Vespa (Daphne Zuniga), who is set to marry the narcoleptic Prince Valium (Jim J. Bullock). He dispatches Dark Helmet (a memorable performance by Rick Moranis) on the giant ship Spaceball One to carry out the mission. What they weren’t anticipating is that Vespa has decided to do a runner before the wedding takes place and has disappeared with her droid of honour Dot Matrix (think a female C3PO). King Roland tasks the mercenary Lone Starr (Bill Pullman, essaying a mix between Luke Skywalker and Han Solo) and his sidekick Barf (the late John Candy, as seen on this poster) with tracking Vespa down. With the help of wise and powerful Yoghurt (also Brooks), who is in command of The Schwartz, the gang must deal with Dark Helmet and put a stop to Skroob’s nefarious plans.

Some of the more memorable scenes include the Lone Starr’s interactions with the gangster Pizza the Hut, voiced by long-time Brooks collaborator Dom DeLuise, as well as a scene at an intergalactic diner which features John Hurt playing himself and suffering the same chest-bursting fate he did in Alien. The film wasn’t met with a great reception on its initial release but would subsequently gain a huge cult following, helped no end by the home video explosion at the end of the 1980s. It’s now regarded as one of Brooks’ best films and rumours of a long-mooted sequel were resurrected following the release of Star Wars: The Force Awakens at the end of 2015.

Maciej Buszewicz is a highly influential Polish designer who is perhaps best known for his book cover designs and is the founder of the celebrated Busciewicz Book Design Studio based in the University of Warsaw. Born in 1952, Busciewicz graduated from the Warsaw Academy of Fine Arts and began a career in graphic design. He became an Art Director at the ISKRY Publishing House in 1980 and at the Poljazz Record Company. Four years later he began teaching typography at the Academy and this led to teaching assignments all over the world. As well as books and record covers, the artist has worked on graphic identities, stamp designs and posters. I couldn’t find many other film posters that he worked on, aside from the poster for the Russian drama Commissar, but doubtless there are others. According to this profile on the Ideas on Design site he has won the award for Most Beautiful Book of the Year in Poland no less than 23 times!