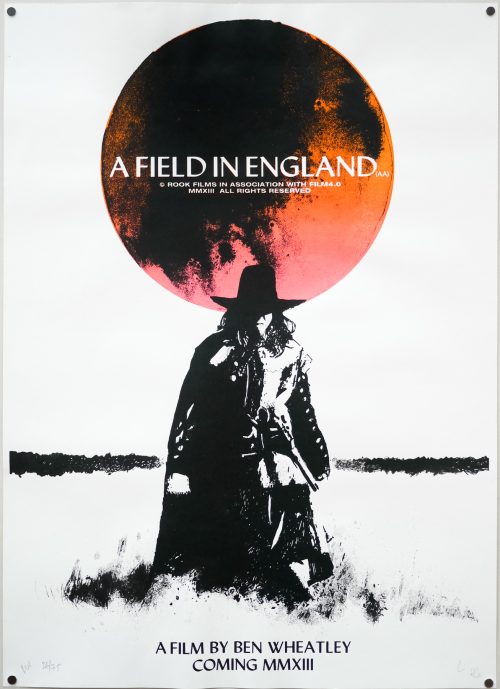 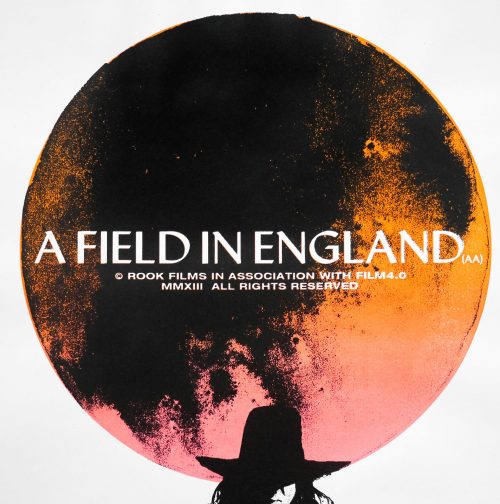 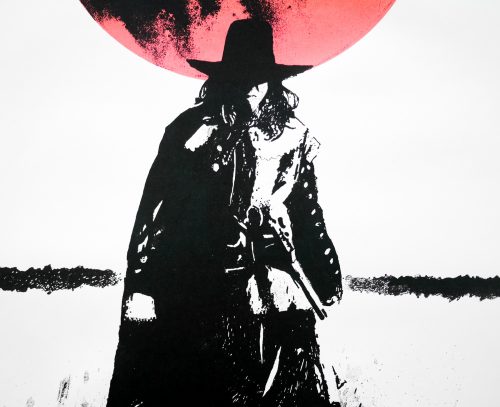 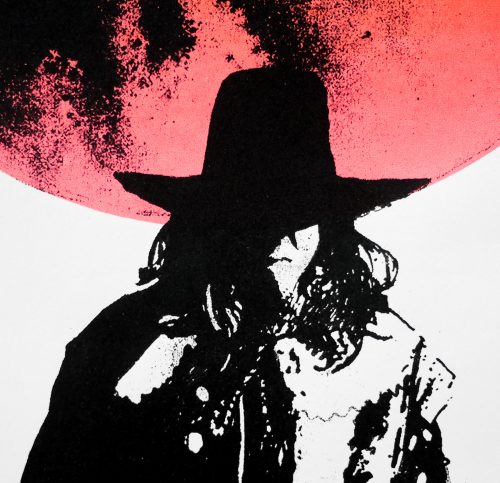 Title
A Field in England

Several months before the release of director Ben Wheatley‘s fourth film, A Field in England, a limited edition screen print was commissioned by the production company Rook Films and released in a small run of 75. The film is set during the mid-17th Century English Civil War and was apparently in development for several years after the director became interested in the historical period whilst filming a documentary about the Sealed Knot, an English society that carries out historical reenactments. Amy Jump, Wheatley’s regular collaborator (and wife), wrote the screenplay with filming taking place over twelve days in September 2012.

The film has a small cast of British actors, several of which are known for their comedy backgrounds, including Julian Barratt, Reece Shearsmith and Michael Smiley. Filmed in black and white, the story is set, as the title suggests, in fields near to the edge of a battleground. It follows an alchemist’s assistant named Whitehead (Shearsmith) who has fled away from his strict commander and encounters a group of men who have deserted the battle and are in search of an alehouse. Soon they are intercepted by an Irishman called O’Neil (Smiley, as depicted on this poster) who is another alchemist in search of a treasure he believes to be buried nearby.

Whitehead’s master had tasked him with apprehending the Irishman, who was also in the master alchemist’s employ but stole his work and materials. Armed with a pistol, the malevolent O’Neil takes control of the group and tasks Whitehead with finding the ‘treasure’. Using hallucinogenic substances (magic mushrooms and other powders that were commonly used during the period) O’Neil keeps the men in check but things don’t exactly go to plan. The film features several psychedelic sequences and cleverly uses split-screen imagery and sound design to great effect.

Rather unusually the film was simultaneously released in cinemas, on DVD and blu-ray, on Video on Demand (VOD) and also shown on the Film 4 channel. This report from the BFI (PDF), published several months after release, goes into interesting detail about how it was received. It’s fair to say that, although the critical reception was largely positive (87% on Rotten Tomatoes), audiences reactions were massively polarised. You only have to look at the reviews section on the IMDb’s page for the film to see the 1 and 2 star ratings right next to those calling the film a masterpiece and awarding it the full ten stars.

The film is undoubtedly less commercial and ‘mainstream’ than the director’s previous films, including Kill List and the brilliant comedy Sightseers, so it will have confounded fans of those films expecting something more straightforward. Those that did like A Field in England praise the strange and brooding atmosphere, the aforementioned sound design, and the clever cinematography and use of editing to enhance the sense of menace.

Rook Films commissioned the designer/artists Kenn Goodall and Luke Insect, who work together under the moniker of Twins of Evil, to work on this teaser poster before filming had even taken place. The pair had worked on the soundtrack release for Sightseers for Rook in the past and Wheatley’s producing partner Andy Starke had purchased one of the pair’s screen prints for Witchfinder General.

A Field in England had an excellent website subtitled ‘A Film 4 Digital Masterclass’ that went into great detail about all aspects of the making of the film. This poster had its own section titled ‘The evolution of the poster’ in which Goodall and Insect discussed its creation and showcased several images created during its inception. This lone figure and aesthetic was later used to create the British quad poster, with the line-up of characters expanding to five. The artwork on this teaser later became the cover for the blu-ray release of the film. Note that although some images of this print depict green grass around the figure’s feet, the final poster, screen printed by The Private Press, didn’t feature this colour. Also note that it’s signed (initialled really) by Wheatley as well as the two artists.

This page features other art created for the film, including a great soundtrack poster also by the Twins of Evil. You can check out Luke Insect’s solo website here and Kenn Goodall’s site is here.