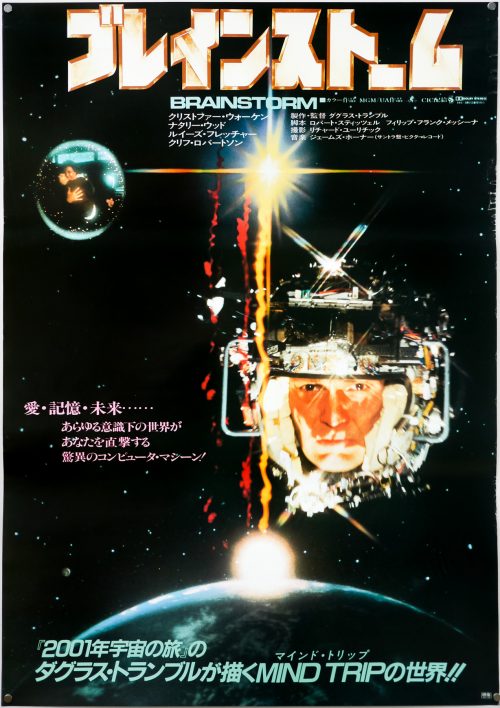 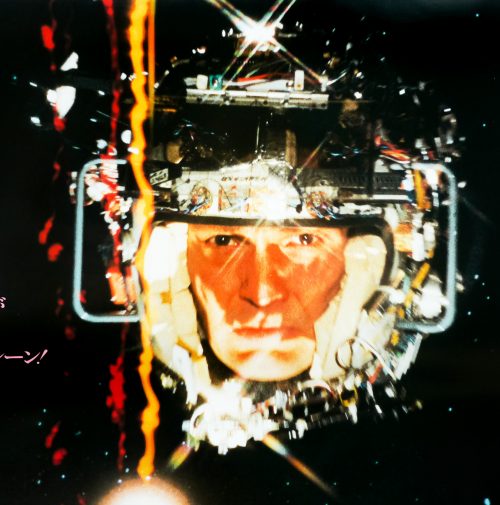 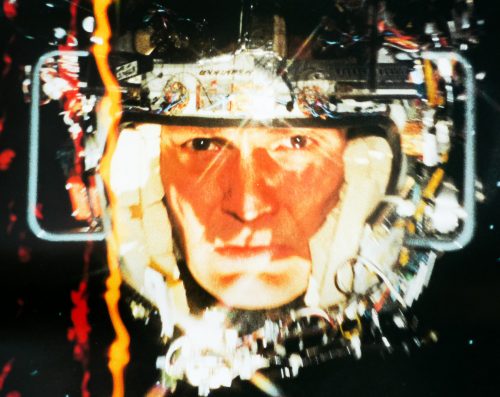 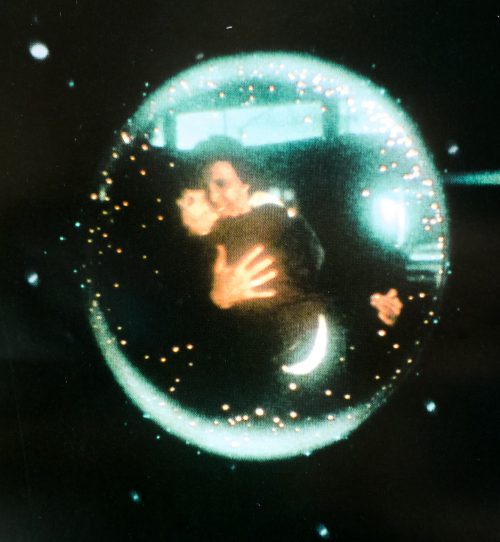 This is the Japanese B2 poster for the release of the science-fiction film Brainstorm, which was the second and final directorial effort from Douglas Trumbull who is best known for his pioneering work in the field of special effects. Trumbull had worked with Stanley Kubrick on 2001: A Space Odyssey and created the iconic ‘Star Gate’ sequence at the end of the film. He would go on to create special effects sequences for films including Close Encounters of the Third Kind, Star Trek: The Motion Picture and Blade Runner. The first film he directed was the cult classic Silent Running (1974) which was a critical success but a box-office failure and it would be eight years before Trumbull would once again sit in the director’s chair.

The film stars Christopher Walken as Michael Brace, a scientist working as part of a pioneering research team that has discovered a method of recording the sensory and emotional feelings of a person onto tape, allowing them to be viewed by others. His estranged wife Karen (Natalie Wood) also works with him and Michael realises he can use the system to reconcile their feelings for each other and show her his true emotions. Unfortunately not all of the scientists use it for good with one recording a sexual encounter which he then shares with several of his colleagues, leading to his eventual dismissal.

Lillian Reynolds (Louise Fletcher) one of the lead scientists is fiercely protective of the team’s work and is angry when the company forces the team to involve military advisors in their plans. When she suffers a heart attack in the lab and is unable to call for help, she records the experience of death into the system. The tape is viewed by another scientist and the sensory experience causes him to also have a heart attack so the company locks the tape away. Lillian’s fears about the nefarious plans of the military are borne out when Michael discovers they plan to use the system for torture and brainwashing but his protestations see him get fired from the program. He and Karen decide to shut down the system to prevent it being used for negative means but Michael is also determined to view Lillian’s ‘death’ tape, despite Karen’s protestations.

Trumbull used the production to work on a new effects process which he called Showscan that allowed for 70mm film to be projected at 60fps (standard film is 24fps) and create a hyperreal feeling to the footage. MGM backed out of plans to create prints in the new format but Trumbull did film the virtual reality sequences in the larger Super Panavision 70 format and the ‘normal’ sequences in the conventional 35mm format so that it changes throughout the film whenever the scientists use their machines. The film was shown at special 70mm cinemas during its initial run.

The film’s production was unfortunately overshadowed by the mysterious death of Natalie Wood who drowned whilst on a boat trip with Walken and her husband Robert Wagner. MGM shut down the production and were planning to write it off and claim insurance on the money already spent. Trumbull and others argued with the studio that Wood had already completed most of her key scenes and the insurers realised that the film was salvageable. They agreed to finance the completion of production for a cut of any profits but by then things were getting very acrimonious between the director and MGM.

Trumbull was allowed to finish the film by rewriting several scenes and using a body double for Wood in some scenes but the experience critically damaged his desire to work inside the Hollywood system again. In 1983 he stated, “I have no interest…in doing another Hollywood feature film…Absolutely none. The movie business is so totally screwed-up that I just don’t have the energy to invest three or four years in a feature film. Moviemaking is like waging war. It destroys your personal life, too.” Sadly Brainstorm under-performed in cinemas despite strong critical notices and failed to recoup most of its final budget.