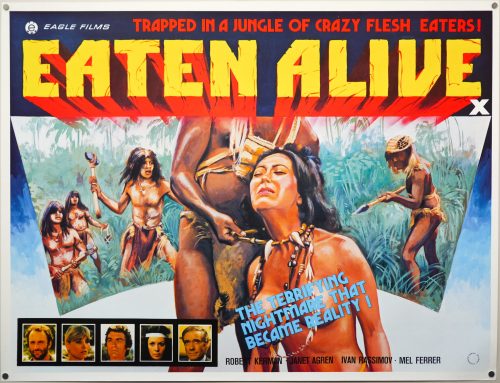 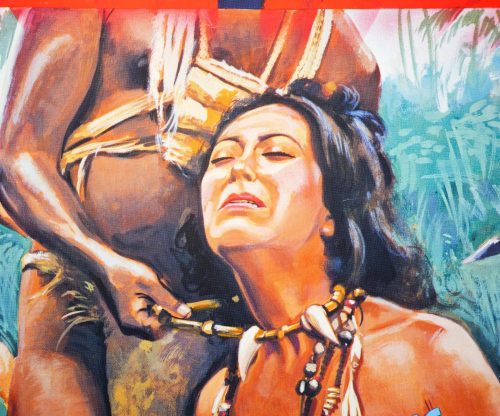 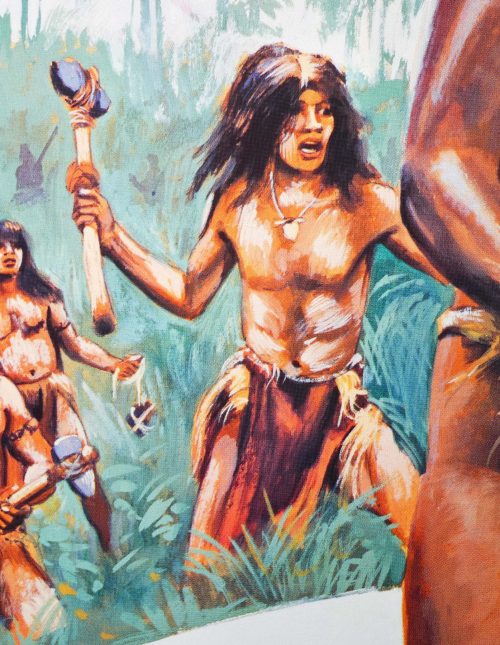 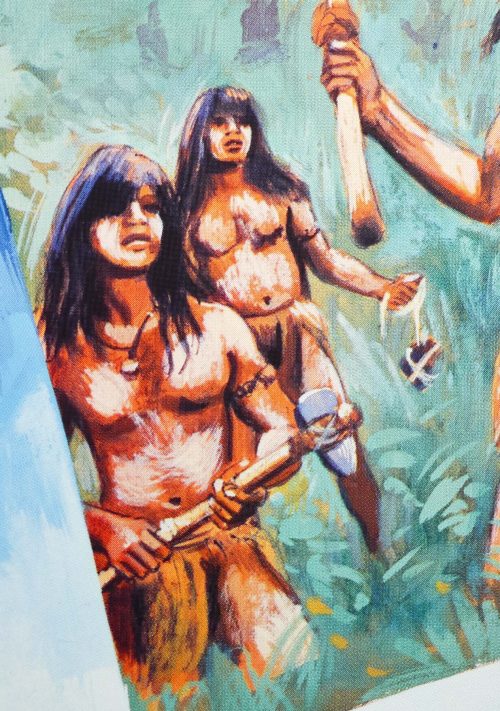 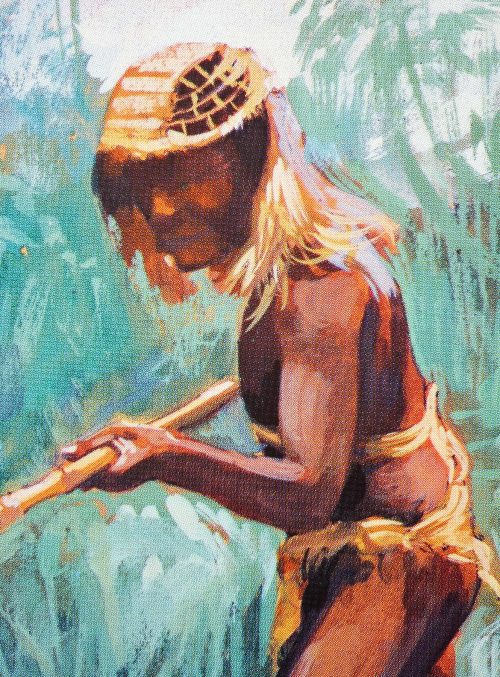 Tagline
Trapped in a jungle of crazy flesh eaters! | The terrifying nightmare that became a reality!

Lurid artwork by the late, great Tom Chantrell on this UK quad for the release of Italian director Umberto Lenzi‘s 1980 entry into the then burgeoning cannibal subgenre of horror, Eaten Alive! (here just Eaten Alive). This is not to be confused with Tobe Hooper’s 1976 film of the same name about a redneck killer with a pet alligator. Eaten Alive wasn’t Lenzi’s first foray into the subgenre and the director is regularly credited with kickstarting it all with his film Deep River Savages (AKA Sacrifice!) in 1972. This film was released the same year as Cannibal Holocaust, directed by fellow countryman Ruggero Deodato, which is today considered to be the pinnacle of the genre and remains notorious to this day. Not to be outdone, Lenzi filmed one of the subgenre’s most unapologetically nasty entries, Cannibal Ferox, only a year after this film was released, but by that point the subgenre was beginning to fade and only a few more obscurities were made during the 1980s.

Unlike Ferox and Holocaust, Eaten Alive is more of a jungle adventure film and isn’t told in the pseudo-documentary, mondo style of the other films. Not only did Lenzi utilise stars from other cannibal films, including the American pornstar-turned-actor Robert Kerman (who appeared in Holocaust and Ferox) but he also borrowed footage from other films such as his own Deep River Savages and The Mountain of the Cannibal God. Like other entries it also depicts scenes of real animal torture and killings which have always proved controversial and are deeply uncomfortable to sit through today (at least for this viewer). Eaten Alive sees an American woman called Sheila (Swedish actress Janet Agren) who travels to remote New Guinea in search of her missing sister Diana (Paola Senatore) accompanied by Vietnam veteran Mark (Kerman). They discover that Diana has joined a cult deep in the jungle which is being led by a Jim Jones-style guru called Jonas (cannibal flick regular Ivan Rassimov) who rules over his subjects and the local natives using physical and sexual abuse. Sheila, Mark and Diana attempt to escape from the cult’s clutches and there follows several scenes featuring all manner of barbarities.

Today Eaten Alive is considered one of the lesser cannibal films, certainly compared to Holocaust and Ferox, but it’s not without merit for gorehounds looking for a slice of sleazy entertainment. It’s arguably worth a watch as a curio of a film that would never be made today, not least because of the animal cruelty and breathtaking levels of misogyny on display.

Tom Chantrell was a celebrated British artist whose dynamic and colourful work featured on hundreds of posters over a forty year period. His official website features a great biography written by Sim Branaghan, author of the must-own British Film Posters. Chantrell illustrated many classic poster designs, including several Hammer posters such as the brilliant quad for ‘One Million Years B.C.’, and was also responsible for the iconic Star Wars quad, the artwork of which ended up being used around the globe. I have a number of other designs by him on this site. The chunky title treatment is one of the artist’s specialties and features on several of his posters, which can be seen on his official site.