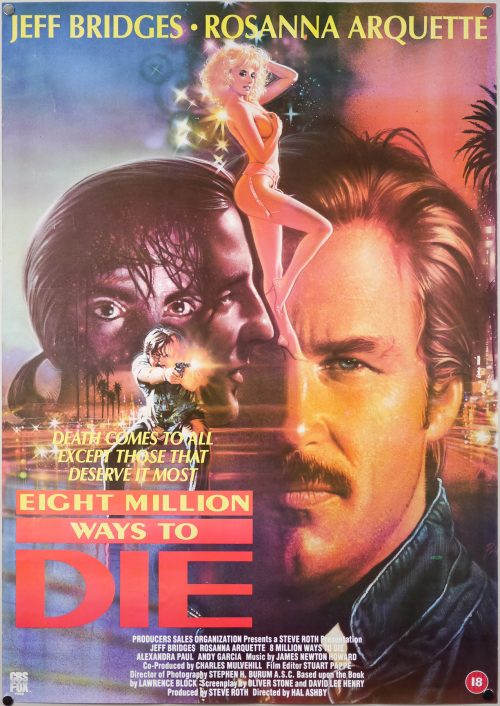 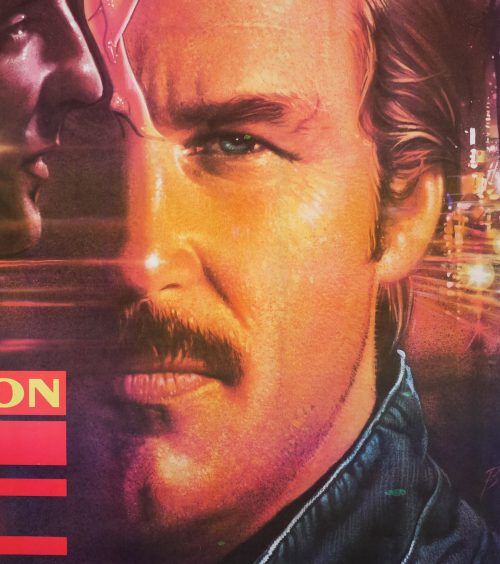 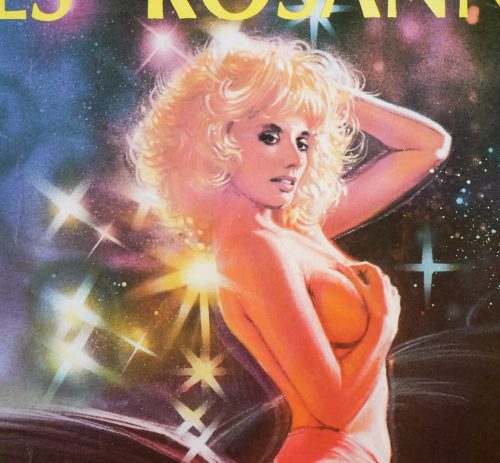 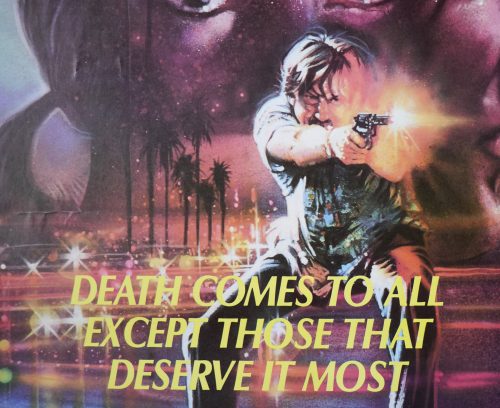 Tagline
Death comes to all except those that deserve it most

This is the UK video poster (note the 18-rating emblem) for the release of Eight Million Ways to Die, a crime drama that was to be the final film by the late Hal Ashby. The director was associated with the American New Wave that started in the 1960s, lasted until the 1980s and saw a younger generation of filmmakers invading tinseltown, forever changing the way films were shot, edited and released. The Wikipedia article on the period gives you a good idea of the kinds of directors that were part of the new wave, which included the likes of Woody Allen, John Cassavetes, Martin Scorsese and Steven Spielberg.

Ashby began his career as an editor, with credits including In the Heat of the Night and the original Thomas Crown Affair, but he was encouraged to begin directing in 1970 with The Landlord, a critical success that was largely ignored by audiences at the time. This was quickly followed by Harold and Maude , an offbeat comedy that has a sizeable cult following today. Ashby embraced the hippie lifestyle of the early 1970s and his films featured main characters that were on the edge of ‘normal’ society. His biggest hit would prove to be the 1978 romantic drama Coming Home that was set against the backdrop of the Vietnam war, and would see him garnering a Best Director nomination at the Oscars that year, whilst the two main stars, Jon Voight and Jane Fonda, both won the main Best Acting gongs.

Eight Million Ways to Die was based on a book by the prolific American author Lawrence Block whose most famous series of novels focused on the private investigator (and recovering alcoholic) Matthew Scudder. The screenplay was written by Oliver Stone with help from R. Lance Hill and an uncredited Robert Towne. The actor Jeff Bridges was given the part of Scudder (Ashby had previously directed his brother Beau Bridges in The Landlord) and Rosanna Arquette appears as Sarah, a call girl who is central to the story. The film’s plot is described thusly on IMDb:

Scudder is a detective with the Sheriff’s Department who is forced to shoot a violent suspect during a narcotics raid. The ensuing psychological aftermath of this shooting worsens his drinking problem and this alcoholism causes him to lose his job, as well as his marriage. During his recovery through Alcoholics Anonymous, he meets a mysterious stranger who draws him back into a world of vice. In trying to help this beautiful woman, he must enter a crime-world of prostitution and drugs to solve a murder, while resisting the temptation to return to his alcohol abuse.

Unfortunately for all concerned the film was a critical and commercial flop and was yet another disappointment for Ashby, who by then had garnered something of a reputation for prolific drug-taking and eccentric behaviour during the post-production of his films. He would never again direct a film, despite efforts to turn things around, and would sadly die of cancer in 1988, aged just 59.

The artwork on this UK video poster is by the British artist Brian Bysouth and the art has been trimmed somewhat for the poster as his truncated signature can be seen towards the bottom right-hand side. Bysouth is one of my favourite poster artists and he was responsible for many classic posters from the 1960s to the 1980s, including the final painted poster for a James Bond film, The Living Daylights. In 2012 I was fortunate to meet and interview Brian for this site and the article can be read here.