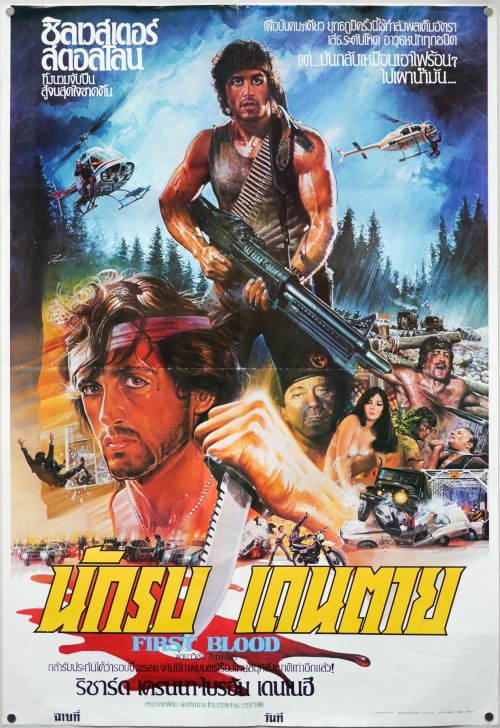 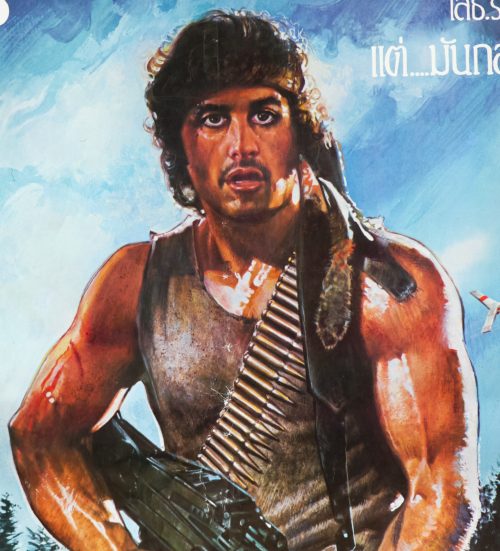 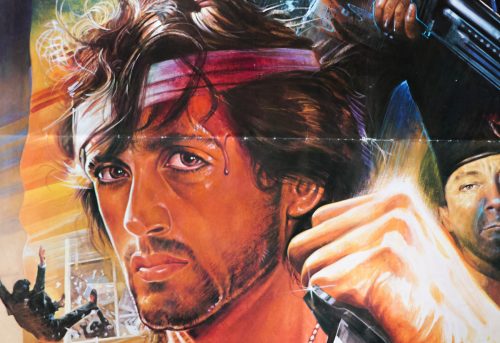 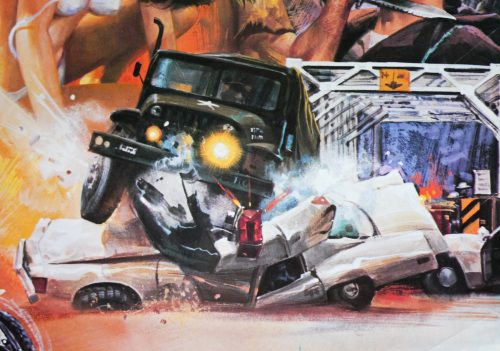 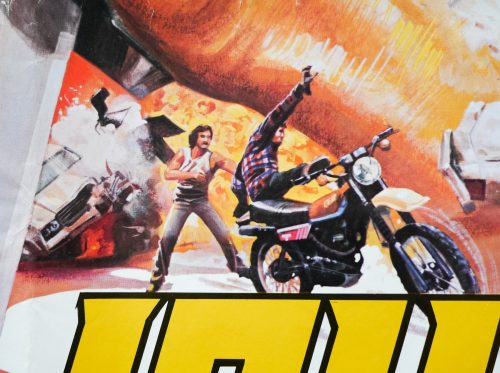 This is the scarce, large-size poster for the Thai release of the first film in what would become known as the Rambo series, First Blood. Helmed by the Canadian director Ted Kotcheff, the film was co-written by the film’s star Sylvester Stallone. Stallone would eventually become best known for two series that between them saw 11 films released over a 40 year period; the Rocky boxing saga and Rambo. The first Rocky film had been met with critical and commercial success when it was released in 1976. A sequel followed three years later and Stallone had Rocky III in cinemas at the same time as First Blood (1982). The latter cemented the actor as a box-office behemoth and he became one of the 1980’s action megastars, alongside Arnold Schwarzenegger and Bruce Willis.

First Blood started life as a 1972 novel by author David Morrell which had its rights optioned by Columbia Pictures almost immediately. The project then spent the next decade bouncing between studios, producers and directors. Eventually Stallone was offered the lead role and Ted Kotcheff agreed to direct for the legendary producers Mario Kassar and Andrew G. Vajna of Carolco Pictures.

John J. Rambo (Stallone) is a former US Special Forces soldier who has returned from Vietnam still haunted and disoriented by his experiences there. He decides to pay a visit to an ex-forces friend by hitchhiking across the country. When he arrives he discovers that his pal died soon after returning from the war due to exposure to Agent Orange. Rambo continues his journey on foot and eventually arrives in the small town of Hope, Washington. There he is confronted and abused by the local sheriff known as Teasle (Brian Dennehy) who drives Rambo out of town and tells him not to return.

Deciding to defy the orders, Rambo is soon arrested by Teasle for a series of bogus charges. Whilst in detention and being sadistically attacked by the other corrupt sheriffs, Rambo has flashbacks to being a Prisoner of War in Vietnam. Fearing for his life, he fights his way out of the jail. There then follows a cat and mouse chase as he flees into the nearby forest, pursued by Teasle and a gang of his men. He manages to evade and outwit the sheriffs and eventually his former commanding officer Trautman (an excellent Richard Crenna) arrives in Hope to help with the situation. Trautman warns the lawmen that Rambo will not come quietly and urges them not to corner him. When they fail to heed his warning, a series of violent encounters ends with Rambo pitched against Teasle in a night-time confrontation.

The film was a huge box-office success on its release, although film critics were less than impressed at the time. It would later be given a critical reappraisal and quickly gained cult status once it was released on home video. Two sequels were released in the 1980s but these were much more gung-ho and violent than the original. It’s often forgotten how relatively tame the first Rambo film is compared to the three sequels, particularly the later revival film, Rambo (2008).

This is one of three Thai posters that exist for First Blood. At least one of them is for a later re-release but I believe this poster, which is the size of a US one-sheet, was printed for the original cinema release in Thailand. The main figure of Rambo with the giant machine gun is based on the artwork by Drew Struzan that was used on the American one sheet and British quad. It has been repainted by Tongdee and the rest of the poster is of the artist’s own creation.

Tongdee Panumas was an incredibly prolific film poster artist during the 70s, 80s and 90s. I’ve been unable to find out much about him, other than that he was born in 1947, so if anyone has any more details please get in touch.