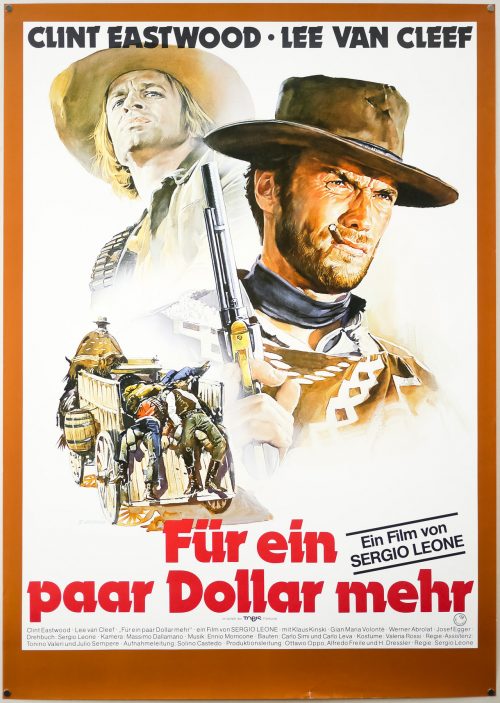 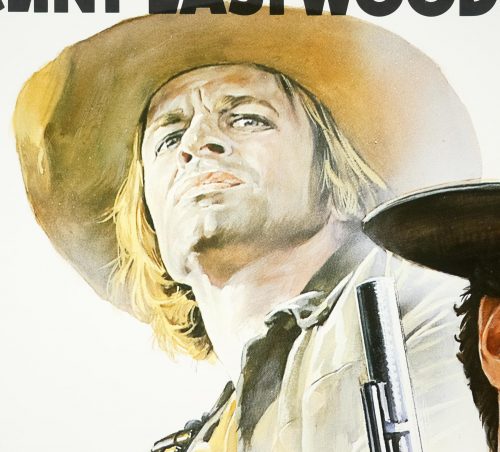 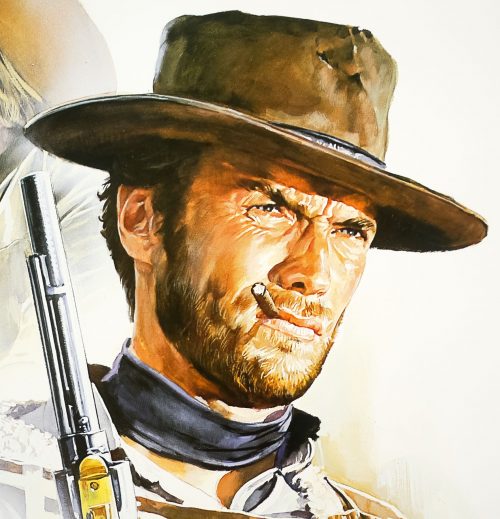 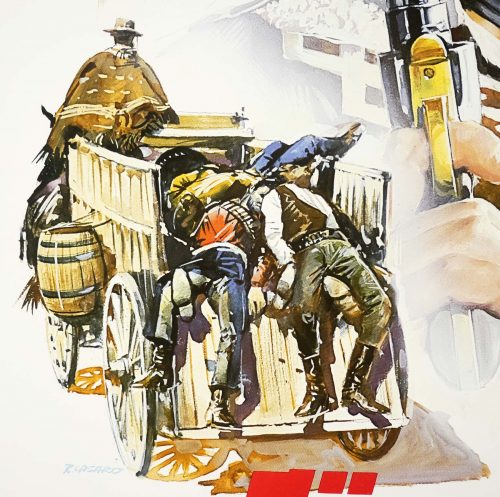 Title
For A Few Dollars More

An excellent portrait of Clint Eastwood graces this A1 poster for the German re-release of For a Few Dollars More in 1978. The film was the second in legendary director Sergio Leone‘s unofficial ‘Dollars trilogy’, all three of which starred Clint Eastwood and helped put him and the sub-genre of the so-called Spaghetti Western firmly on the cinematic map. Although not conceived by Leone to be a series, The ‘Man with No Name’ concept was coined by the studio United Artists as an angle to sell the films, particularly since Eastwood plays the three different characters with similar mannerisms and dressed in the same attire. Despite the ‘n0 name’ label, Eastwood’s characters have a different nickname in each of the films.

In For a Few Dollars More he plays Manco (Spanish for ‘one-armed man’), a bounty hunter who is on the trail of the ruthless outlaw El Indio (Gian Maria Volonté) and his gang. Whilst on the hunt Manco meets Col. Douglas Mortimer (Lee Van Cleef, who would also appear in the next film in the trilogy) another bounty hunter who is also after the same man, and the two agree to team up and eventually split the reward. As the bullets begin to fly it soon becomes clear that the bounty hunters have different motivations for wanting to kill El Indio.

When I interviewed the artist Renato Casaro for this site earlier this year he talked about his friendship and collaborations with Leone and the following is an excerpt:

You also got to know Sergio Leone?
Yes, I visited the set of ‘Il mio nome è Nessuno’ [My Name is Nobody, 1973] that Leone was co-directing because Terence Hill was starring in it and I was asked to work on the publicity. I later worked on the posters for Once Upon A Time in the West and his other Western films, not only for the Italian market, but also for other countries, including Germany and France. Some of the more established Italian artists worked on his posters in the 1960s because they were still working on the ‘big’ films at that time, as I mentioned.

What happened when it came to painting the re-release posters?
Sandro Symeoni had painted the original Italian poster for A Fistful of Dollars and at that time Clint Eastwood wasn’t the big name star he was a few years later so his face wasn’t painted accurately and the poster just depicts an action scene. When the film was re-released in Germany at the end of the 1970s, Leone asked me to make sure I focused the poster on Eastwood and make it a recognisable portrait of him.

You can read the rest of the interview by clicking here. To see the other posters I’ve collected that were designed and painted by Renato Casaro click here. His official website can be found here.