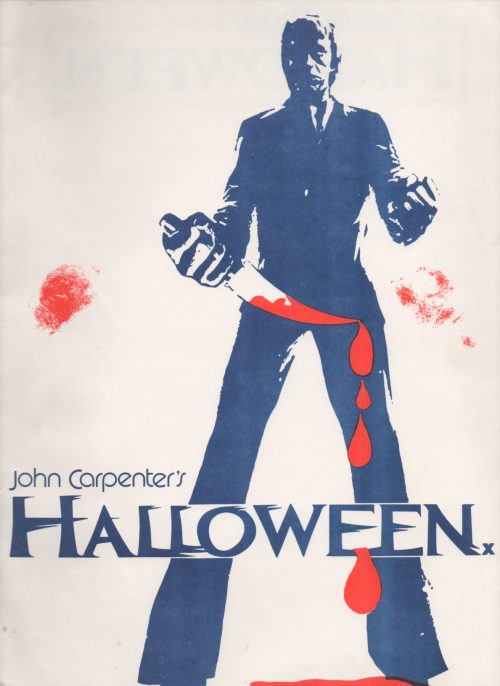 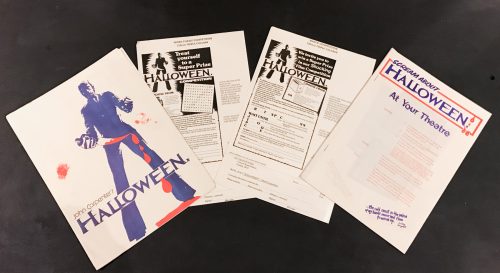 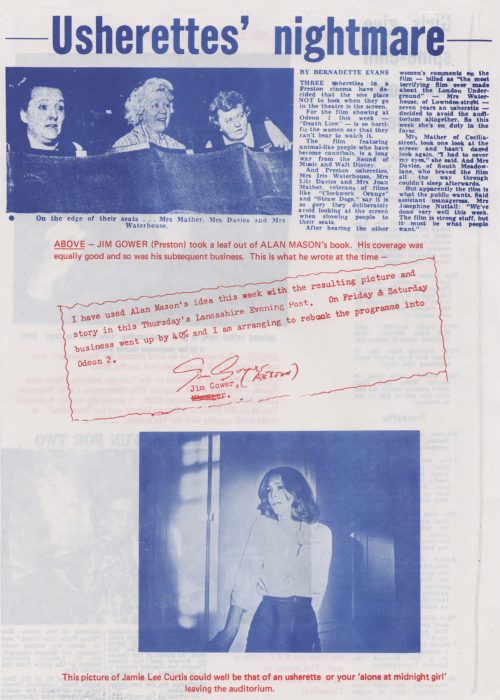 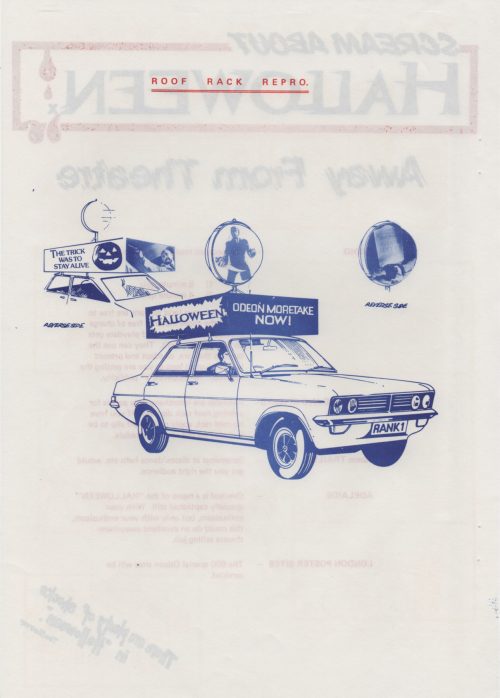 This is a rare cinema advertising guide for the original UK release of John Carpenter‘s seminal horror film Halloween. This guide was, as the name suggests, intended to be sent to managers of the Odeon cinema chain around the UK. It contains multiple pages of suggestions for how to market the film to local audiences and includes competition examples that could have been sent to local newspapers for publication. The guide consists of one outer cover that features unique artwork of the knife-wielding killer (a crude depiction of Michael Myers), as well as printed bloody fingerprints on the back. Inside there’s a stapled together guide which is printed on A4 paper in two colours. The other two items are competition examples, ready for newspapers to print.

The guide was put together, I believe, by the distributor (Miracle films) in conjunction with a company called Marler Haley. They were known for their work with the Odeon chain of cinemas during the 1970s and early 1980s and would create printed items for the promotion of films, which included a quad (30″ x 40″) and typically a set of four double-crown (20″ x 30″) posters, as well as larger exhibition stands and other items. A number of films were promoted this way, including Disney releases such as Tron, the first Star Wars film, and some James Bond outings.

Note the last few pages which detail the kinds of items the cinema managers could order to promote the film, including a ‘roof rack’ display to sit atop a car, trailers, posters and radio ads. The guide features a similar colour scheme and some of the imagery that can be found on the Marler Haley quad, which I have here, and the accompanying double-crown set (which I don’t yet own). Also note there’s an image of the ultra-scarce (but rather boring) Halloween teaser quad, which is text-only and had a panel for cinema staff to manually update the time left until the film arrived. It also features an image of a display stand that has the Marler Haley set along with the final release, full-colour quad that I have in the collection here.

If anyone knows anything more about how and where these guides were put together, please get in touch.

An independent release, financed by one man (Moustapha Akkad), the film was produced on a low budget of $300k and would go on to gross over $70m worldwide. Halloween kickstarted a franchise that would run for seven sequels (and a recent remake) and the masked character of Michael Myers would enter the horror pantheon as one of its most memorable monsters.

The rest of the John Carpenter items I’ve collected can be seen by clicking here.