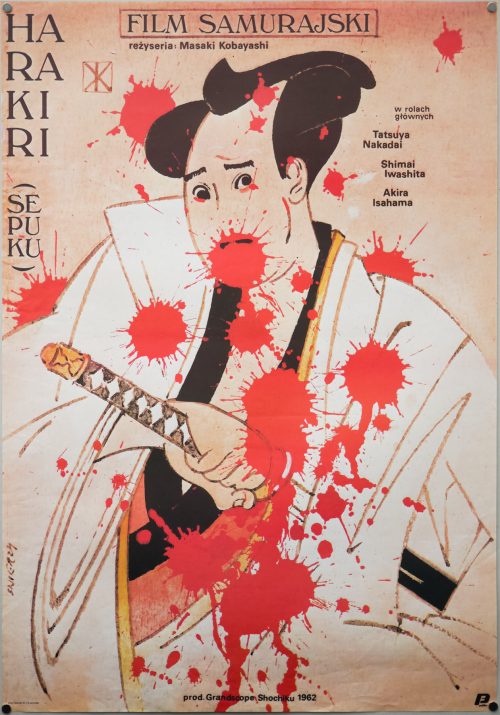 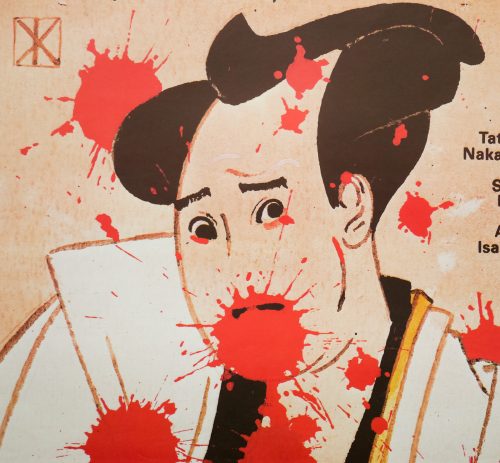 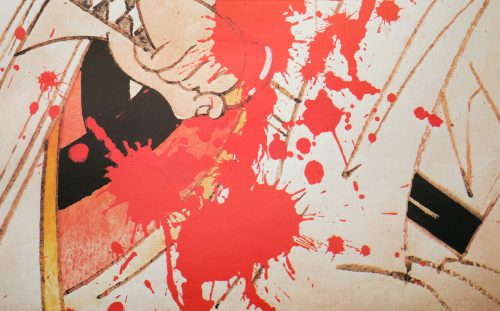 This is a Polish B1 poster for a 1987 re-release of the 1962 Japanese drama Harakiri (originally titled Seppuku) that was designed and illustrated by Waldemar Świerzy. Both titles refer to the grisly ritual suicide by slashing a sword across your own belly that was originally practiced by samurai swordsmen in medieval and early-modern Japan. The action formed part of the samurai code and was used by warriors who would rather die with honour than fall into the hands of the enemy, or by disgraced samurai who had committed gross offences or brought shame upon themselves.

The film was helmed by the celebrated Japanese director Masaki Kobayashi who directed a number of notable films, including the superb horror anthology Kwaidan (1964), before he passed away aged 80 in 1996. The story is set in 17th Century Japan and deals with an elder samurai without a master (known as a Ronin) called Hanshirō Tsugumo (Tatsuya Nakadai, star of multiple Akira Kurosawa films). The plot is described thusly on IMDb:

Peace in 17th-century Japan causes the Shogunate’s breakup of warrior clans, throwing thousands of samurai out of work and into poverty. An honorable end to such fate under the samurai code is ritual suicide, or hara-kiri (self-inflicted disembowelment). An elder warrior, Hanshiro Tsugumo seeks admittance to the house of a feudal lord to commit the act. There, he learns of the fate of his son-in-law, a young samurai who sought work at the house but was instead barbarically forced to commit traditional hara-kiri in an excruciating manner with a dull bamboo blade. In flashbacks the samurai tells the tragic story of his son-in-law, and how he was forced to sell his real sword to support his sick wife and child. Tsugumo thus sets in motion a tense showdown of revenge against the house.

The film won multiple awards upon its release in 1962, including the Special Jury Prize at the Cannes Film Festival and received excellent reviews when released around the world in the following years (1964 was its first release in the USA). Japanese director Takeshi Miike released a remake in 2011 with the title Hara-Kiri: Death of a Samurai.