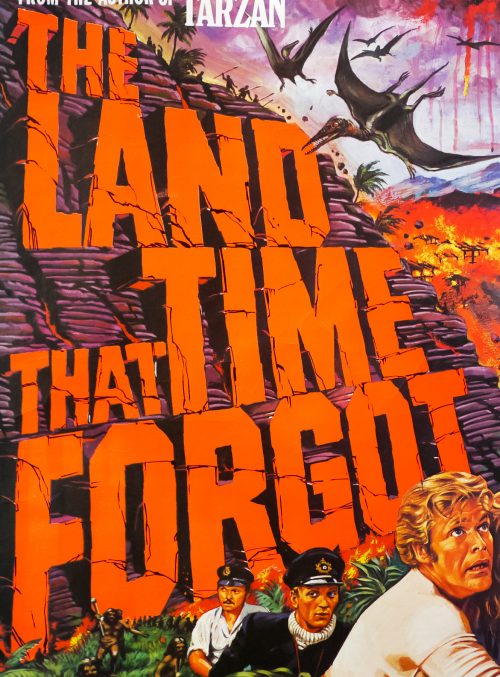 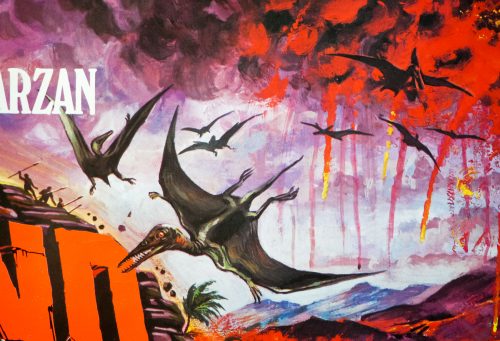 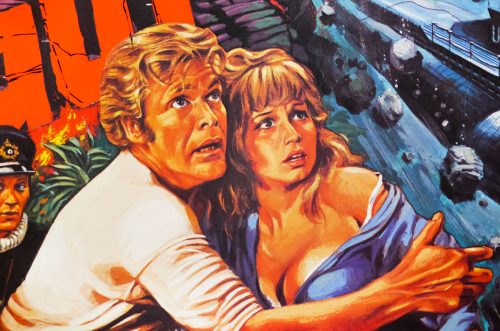 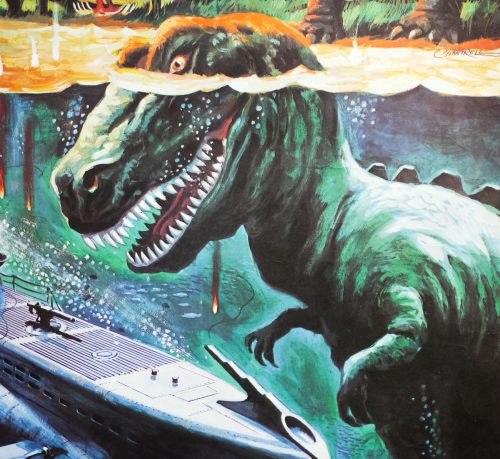 Title
The Land That Time Forgot

Tagline
From the author of Tarzan

The Land That Time Forgot was the first entry in a series of British sci-fi/fantasy b-movies that were directed by Kevin Connor and starred the prolific American actor Doug McClure, known for his hammy leading man performances (McClure was one of the inspirations for The Simpsons’ Troy ‘You may remember me from…’ McClure). The series continued with At the Earth’s Core (1976) and The People That Time Forgot (1977), and ended with Warlords of Atlantis (1978). The initial three were shepherded through production by Max Rosenberg and Milton Subotsky’s Amicus Productions, which was based at Shepperton studios and is perhaps best remembered for its series of portmanteau horror films. By the time Warlords of Atlantis was released the company was almost defunct and so EMI Films stepped in and produced it, utilising many of the same cast and crew as the previous films.

The Land That Time Forgot starts with the torpedoing of a passenger ship by a German U-boat crew. The few remaining survivors, including Bowen Tyler (McClure) and Lisa Clayton (Penhaligon), manage to overcome the U-boat’s crew when it surfaces and they force the captain to pilot the craft back to allied waters. The crew decide to sabotage their plans and the craft ends up completely lost in unknown waters. They happen across a strange island and find an underwater cave through which they pilot the U-boat. When they surface in the islands interior they are immediately set upon by a dinosaur-like creature that eats one of the crew before Tyler manages to decapitate it. The crew then venture through the strange land and come across more giant beasts and a tribe of primitive cavemen before discovering oil, which they hope will allow them to escape back to civilisation.

The film is never less than entertaining and McClure definitely gives it all he’s got. The creature effects have really dated badly, however, and are definitely not up to the standard set by Ray Harryhausen. There’s one excruciatingly bad sequence where the crew blast away at a pair of T-Rex like creatures and the second one takes an age to fall over unconvincingly (explained away by saying that the creature’s brains are slow to send signals). There are some decent special effects like the U-boat scenes underwater but it’s one film that hasn’t stood the test of time as well as some of its contemporaries.

The brilliant artwork on this quad, featuring a cheeky image of a T-Rex underwater (which is definitely not in the film itself), is by Tom Chantrell, the celebrated British artist whose dynamic and colourful work featured on hundreds of posters over a forty year period. His official website features a great biography written by Sim Branaghan, author of the must-own British Film Posters. Chantrell illustrated many classic poster designs, including several Hammer posters such as the brilliant quad for ‘One Million Years B.C.’, and was also responsible for the iconic Star Wars quad, the artwork of which ended up being used around the globe. I have a number of other designs by him on this site.