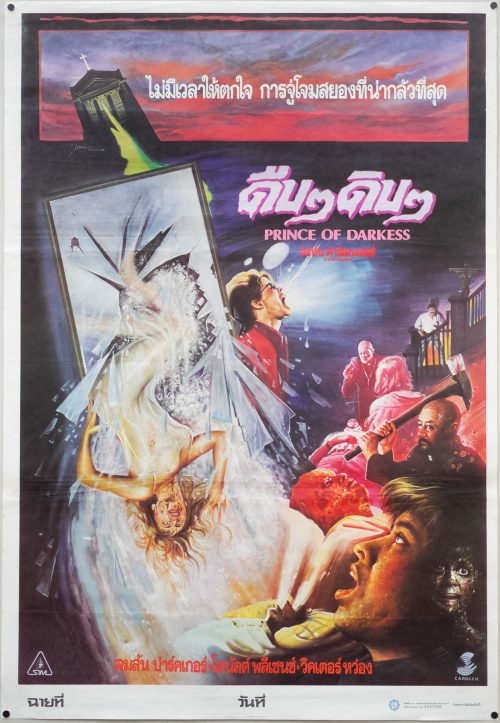 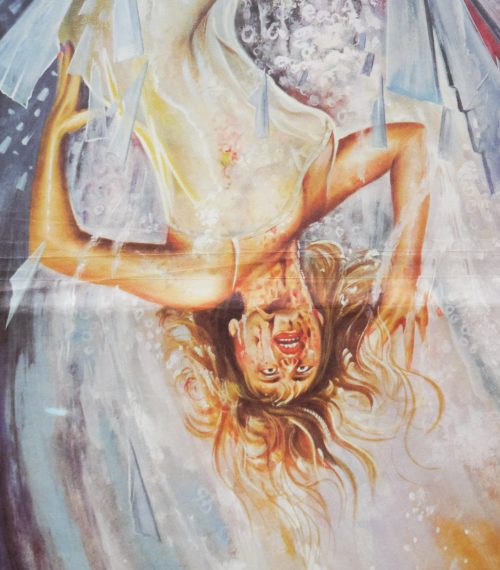 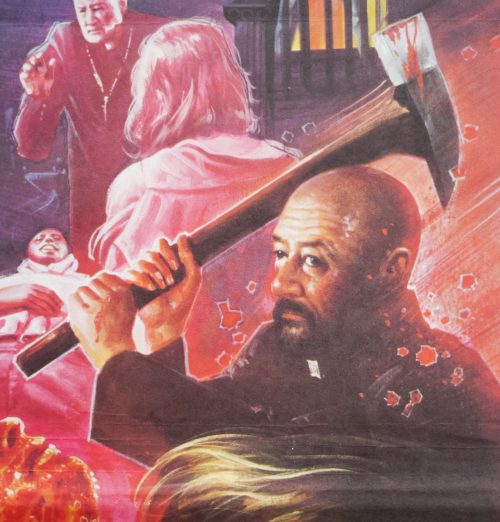 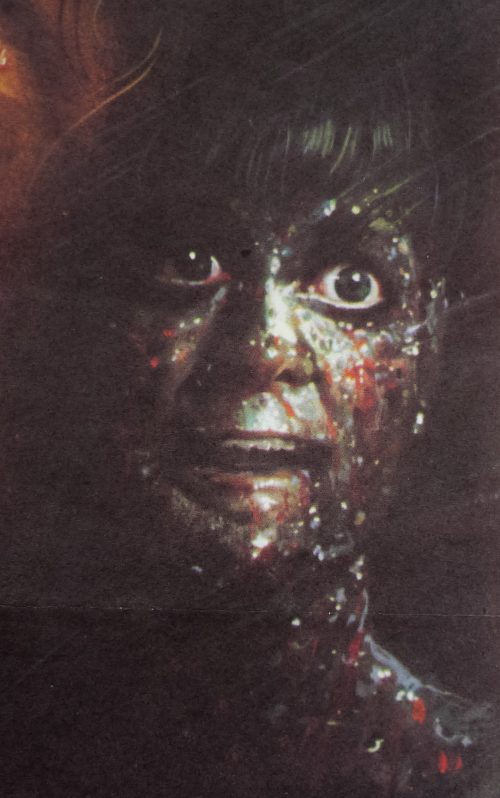 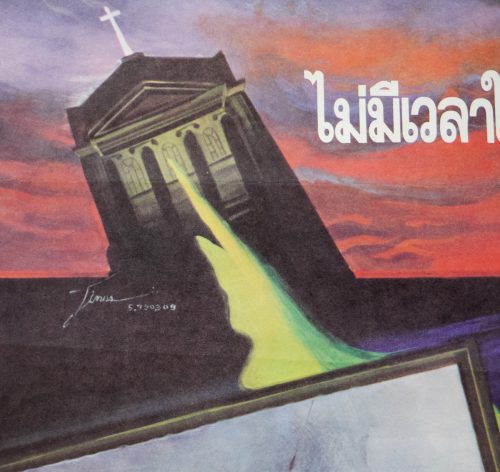 This is the original Thai poster for the release of John Carpenter’s 1987 horror Prince of Darkness. As well as being in the director’s chair, Carpenter wrote the soundtrack and also the screenplay under the pseudonym Martin Quatermass, which is a direct homage to Bernard Quatermass, the lead character in Hammer’s film and TV series that started with The Quatermass Experiment and that features several elements in common with Carpenter’s story. The film is the second in what the director calls his ‘Apocalypse Trilogy’ that started with The Thing (1982) and ended with In the Mouth of Madness (1994) and is the result of Carpenter’s interest in theoretical physics and atomic theory as well as the idea of an ultimate evil or ‘anti-god’ combined with the physics-based concept of matter and anti-matter.

The plot sees Los Angeles priest Father Loomis (Donald Pleasence, his character name directly referencing Halloween) invite Professor Howard Birack (Victor Wong, returning from Big Trouble in Little China) and a group of his students from a local university to help him investigate a mysterious, liquid-filled canister in the basement of an abandoned church that was being guarded by an elderly priest who passed away leaving a diary and a key to the basement. Amongst the group  is Brian Marsh (Jameson Parker) a theoretical physics student and a sceptical science student called Walter (Dennis Dun, also from Big Trouble in Little China), plus several other scientist types – one of the film’s weak spots is that it fails to give any explanation or back story to characters we’re supposed to care about/have some interest in.

Something in the canister is stirring and is causing strange events such as insects swarming the church and the local homeless population, which includes rocker Alice Cooper as ‘street schizo’, behaving as a zombie-like group. One of the students, Susan (Anne Marie Howard) is possessed by a burst of liquid from the canister and begins to kill and spread the possession to other members of the group, which has clear echoes of the way The Thing moves through the Antarctic camp. Meanwhile, the rest of the group have been experiencing the same ‘tachyon transmission’ purportedly from the future and warning them of the danger they face. They soon come to realise that the container actually holds the son of an even greater evil and one that is determined to escape from the realm of anti-matter and into our world. Brian and the handful of non-possessed team members must battle to stop the anti-god from fulfilling its plans before it is too late.

The film features a creepy atmosphere helped no-end by Carpenter’s superb score – one of his very best in my opinion. Despite the aforementioned underdeveloped characters there are still several decent performances, including that of the ever-reliable Pleasence and Lisa Blount, one of the students who is instrumental in stopping the anti-god at the end of the film. The make-up and special effects still stand up well and the set and production design are also worth a mention. It might not be up there with Halloween or The Thing, but it’s still one of Carpenter’s better films and one that definitely deserves its cult reputation.

This Thai poster features a montage of unique artwork painted by the Thai artist who signs his work ‘Jinda’. I’ve struggled to find out much about him so if anyone has any ideas please get in touch. The artist has painted some of the more memorable gore sequences from the film, although the main image of the woman crashing through the broken mirror isn’t exactly accurate, as anyone who’s seen the film can attest.

The section featuring the church and the oozing green liquid featured on several international posters, including the US one sheet and (partially) on the Japanese B2.