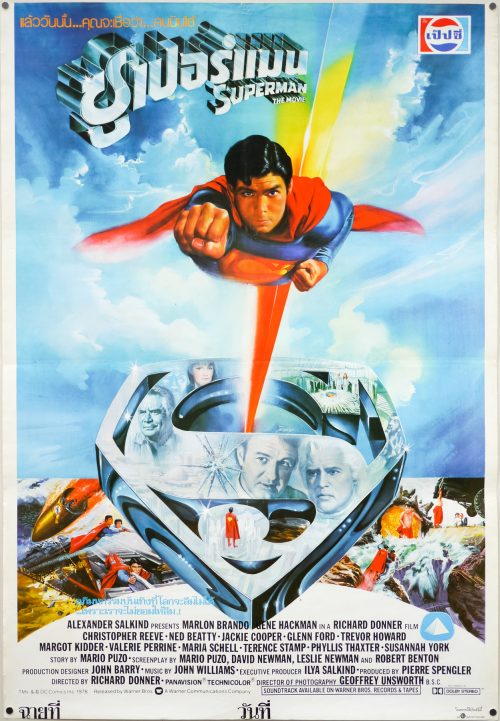 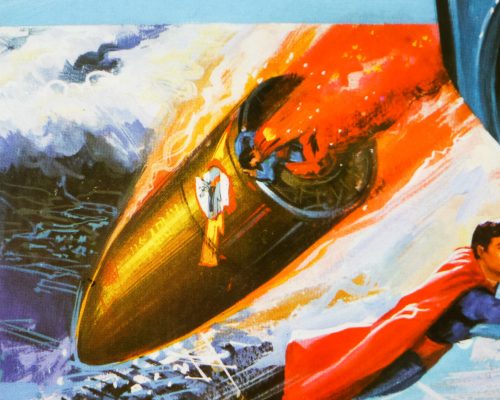 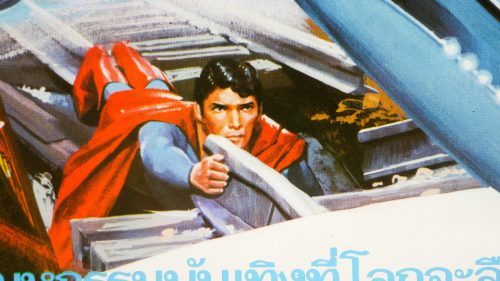 Unique artwork by the Thai artist Tongdee Panumas features on this Thai poster for the release of Superman in 1978 (although the release date in Thailand was likely later). Whilst there had been several other superhero films released over the preceding decades, including three Superman ones, this is often considered to presage the hugely popular franchises of today, including Marvel’s Cinematic Universe and DC’s new crop of films. The Superman character had been invented in 1933 by two high school students, Jerry Siegel and Joe Shuster, who would go on to sell their creation to the original incarnation of DC Comics (then called Action Comics) in 1938.

The first Superman film appeared exactly 30 years before this one and was actually a 15 chapter serial that dealt with the character’s origin story, from his birth on the dying planet of Krypton to his eventual assumption of the guise of mild-mannered reporter Clark Kent in the city of Metropolis. The 1978 film tackled the same origin story and was in development for around four years after Alexander and Ilya Salkind, a father and son producing team, negotiated the rights from DC in 1974. The Godfather scribe Mario Puzo was hired to write the script and the hunt for a suitable director took almost three years before Richard Donner was eventually selected. The producers decided to film Superman and its sequel back-to-back, but tensions during the production saw the latter’s production put on hold to focus on the first film. Puzo’s script was apparently completely retooled by Donner and an uncredited Tom Mankiewicz.

The casting of Superman was as protracted as the hunt for a director and several A-list actors were offered the part before the production team decided to instead go with the relatively unknown Christopher Reeve. The choice would be richly rewarded, both in financial terms but also in the amounts of critical praise Reeve would garner over the months following the films release. Any doubts about the film being a schlocky retread of previous superhero films were put to bed by the casting of the likes of Marlon Brando (taking a then record salary with profits percentage totalling $19m) as Superman’s father Jor-El, Gene Hackman as the villainous Lex Luthor and Margot Kidder as Lois Lane.

The film begins with the destruction of Krypton and Kal-El’s (Superman) parents sending their infant son off into space to land on Earth in the fictional town of Smallville in Kansas. The boy is found and raised by Jonathan and Martha Kent as their own son (whom they name Clark) and the couple vow to keep his burgeoning powers a secret. When he reaches 18, following the death of Jonathan, Clark hears a psychic call and travels to the Arctic with a crystal he finds in the craft that took him to earth. There the crystal builds the Fortress of Solitude where a hologram of Jor-El teaches his son about his origins and the extent of his powers. After 12 years of training Clark heads to Metropolis and takes a job as a reporter at the Daily Planet newspaper where he meets Lois Lane, a fellow reporter. Soon after he begins using his powers in public for the first time with heroic rescues and acts of crime prevention proving to Metropolis that there is a superhero in their midst.

The nefarious plans of Lex Luthor threaten the lives of everyone on the West Coast of America and Superman must act to stop him, however the master criminal learns of Superman’s weakness when it comes to the radioactive element Kryptonite which, as the name suggests, comes from his home planet. At the time the film was the most expensive made, with a budget of $55 million, but it ended up as a huge box-office success and earned over $300m during its cinema run. The then groundbreaking special effects were particularly praised and the film was able to capitalise on cinema audiences’ appetite for science-fiction and fantasy following the release of films such as Star Wars and Close Encounters of the Third Kind a year earlier. Critics lavished the film with praise and the sequel was quickly put into turnaround by the producers, although things didn’t exactly work out smoothly for most involved.

Note that the scenes from the film depicted towards the bottom of the poster also appear in much more detail on a series of Thai lobby posters that I plan to add to the site in the near future. Elements of this poster are of course based on the classic US poster by Bob Peak that features the Superman logo against blue sky and clouds.