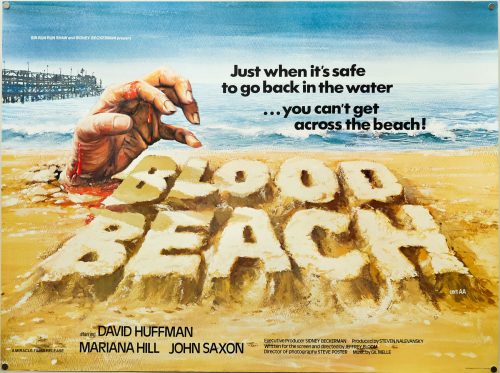 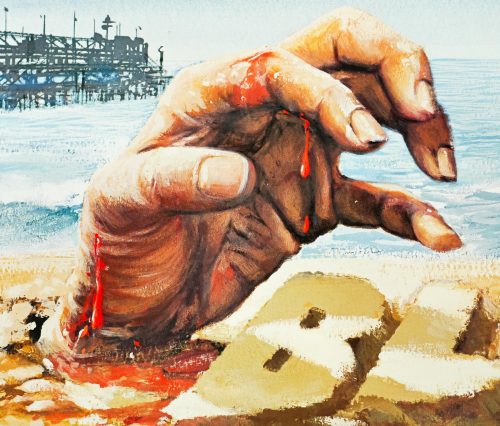 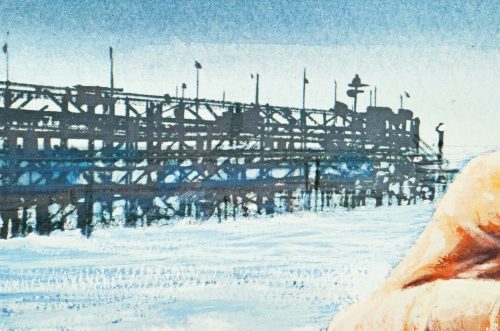 Tagline
Just when it's safe to go back in the water... you can't get across the beach!

Something lurks beneath the surface of Santa Monica beach and it’s hungry for flesh – can it be stopped? That’s pretty much the elevator pitch for the 1980 horror film Blood Beach, which was directed by Jeffrey Bloom and features genre stalwart John Saxon and prolific character actor Burt Young (perhaps best known for his role as Paulie in Rocky) as two local policemen assigned to discover the truth behind a number of mysterious disappearances (and a dog with a missing head).

For a film with such a simple premise Blood Beach is surprisingly boring and features several limp sequences involving the other two names mentioned on this poster. David Huffman and Marianna Hill play two locals with a muddily explained backstory and any pretence of them being the film’s leads is abandoned halfway through. There are a handful of effective scenes featuring victims being dragged beneath the sand (I’d actually like to know how the effect was achieved) and one moment where an unlucky gentlemen (well, technically, would-be rapist) has his privates removed by the creature. When it is finally revealed, the beast is so terribly realised that any fear that might have built up immediately evaporates – perhaps the budget ran out by that point but the rubber monstrosity on show is beyond laughable.

Currently the film is very hard to track down if you do want to subject yourself to it, and I actually ended up watching it on a German DVD, which is the only digital release available worldwide and is the slightly modified R-rated version.

The poster was designed and illustrated by Tom Beauvais, a British artist with a lengthy career working in film marketing which saw him design and/or illustrate several notable posters, including the quad for Butch Cassidy and the Sundance Kid and Mad Max. He was also responsible for the infamous ‘rotten hand bursting from the ground’ image for Lucio Fulci’s Zombie Flesh Eaters, a device Tom was clearly happy reusing for this poster! In 2012 I was lucky enough to meet and interview Tom and the article can be read here.