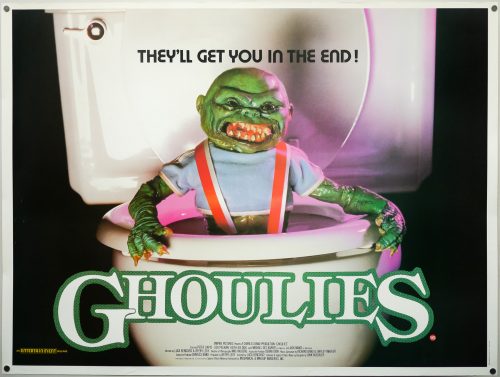 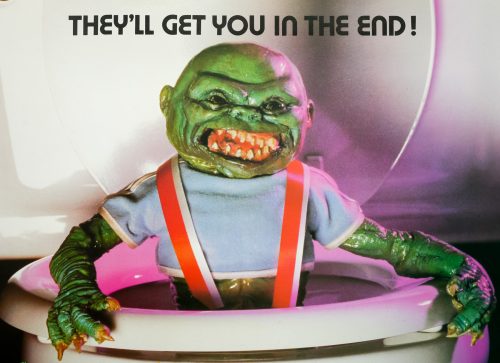 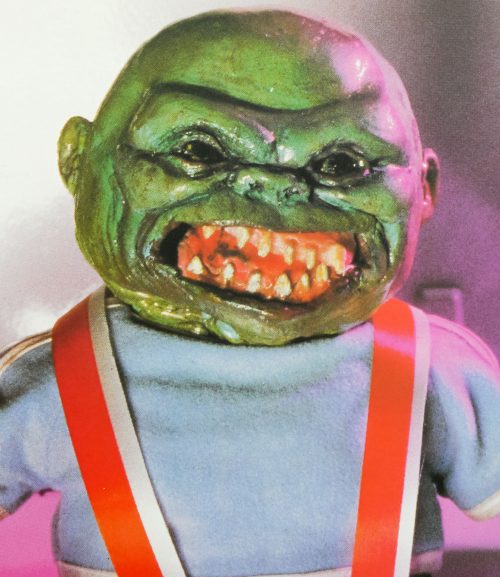 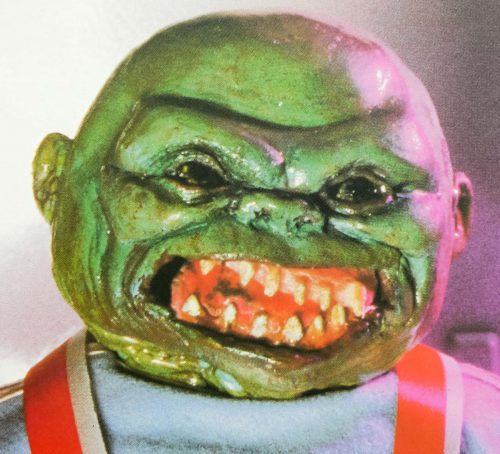 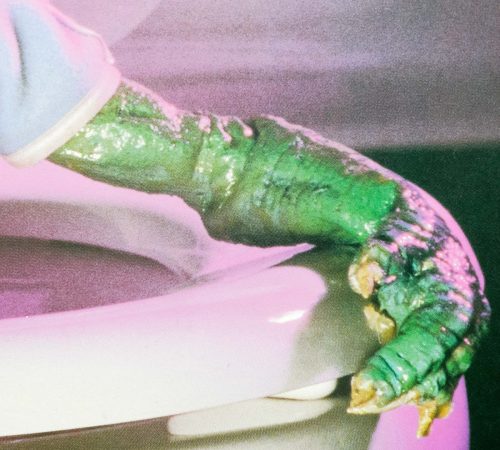 Tagline
They'll get you in the end!

This photographic image advertising the 1984 schlock-horror Ghoulies is absolutely seared into my memory from visits to video rental stores as a youngster where I would see the then forbidden fruits of the horror section. Illustrated covers by artist Graham Humphreys for titles like Evil Dead and Kindred sat alongside photographic designs that hinted at the horrors contained within. This photo of a small green creature bursting out of a toilet, coupled with a title that in UK slang is another word for testicles, sparked plenty of imagined atrocities committed against unsuspecting male victims who’ve just gone for a nice sit down on the porcelain throne.

The reality is that this image was a complete fabrication that was created for the marketing campaign and used around the globe to market the film. The green Ghoulie does pop up from a toilet during the film but it’s a blink and you’ll miss it moment, it’s also not wearing any clothes (as is depicted here), and there’s certainly no obvious harm done to any genitals during the film. According to the Wikipedia article on the film, producer Charles Band had some involvement in creating the image, although it’s a bit confusing:

According to stories Charles Band tells on his Full Moon Horror Road Show, he was tasked to come up with a great campaign to promote the film. During a brainstorming session he came up with the idea to have the Ghoulie popping up from the toilet. The idea was a huge success and the scene was then shot for the film after the fact. According to Band’s 2012 audio commentary for 88Films Blu-ray of Puppetmaster 2, someone else came up with the idea of the Ghoulie popping out of the toilet. Band actually thought it was a bad idea at first.

The film itself is hardly a classic of the genre but it has aged better than some of the other ‘malevolent creature’ films released around the same time. With that said, most of the effects haven’t held up well, particularly the creatures themselves which are poorly put together and unconvincing, especially in comparison to the creatures seen in Joe Dante’s Gremlins that was released the same year. The film is chiefly set in an old mansion that is inherited by student Jonathan Graves (Peter Liapis) after the death of his father Malcolm (Michael Des Barres giving it all he’s got). Unbeknownst to Jonathan, his mother was actually killed during a satanic ritual carried out by his father in which he was meant to be sacrificed as a baby. When a protective amulet prevented the murder being carried out, Malcolm decided to sacrifice his wife instead. Wolfgang (Jack Nance), a member of the cult, takes Jonathan away and raises him so he’s unaware of the situation with his parents.

The film opens with the ritual in which we see the group of small evil creatures (they’re never exactly referred to as Ghoulies in the film) reacting with glee, the film then jumps to a few years later when Jonathan has just moved into the mansion. He soon finds the occult paraphernalia that his father left behind and, for reasons that aren’t clearly explained, decides he wants to continue his father’s satanic practices. His friends and girlfriend Rebecca (Lisa Pelikan) get caught up in the new rituals and before long the Ghoulies have returned and his father has been resurrected from the grave. All does not go exactly to plan for Jonathan, but Wolfgang is still around and his vow to protect the boy holds strong.

I’m unsure who is responsible for the design of this quad so if you have any ideas please get in touch.