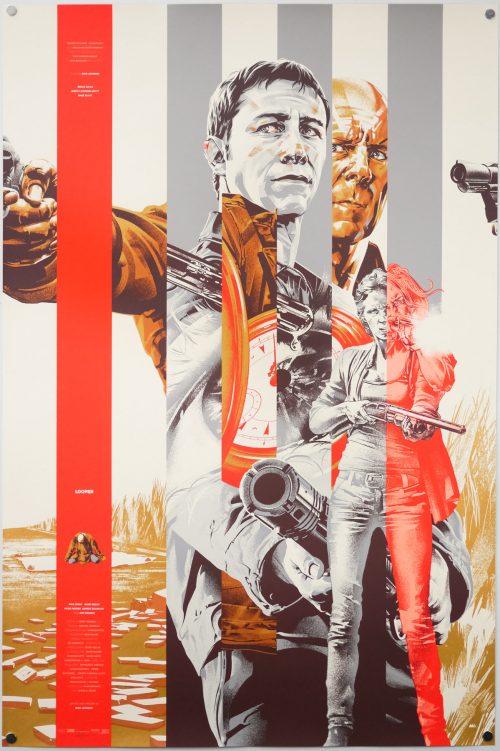 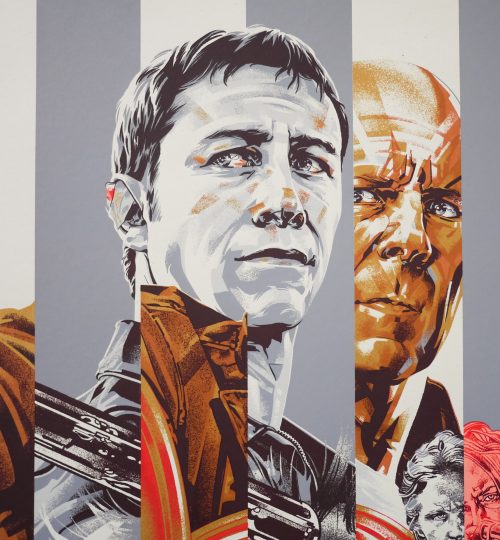 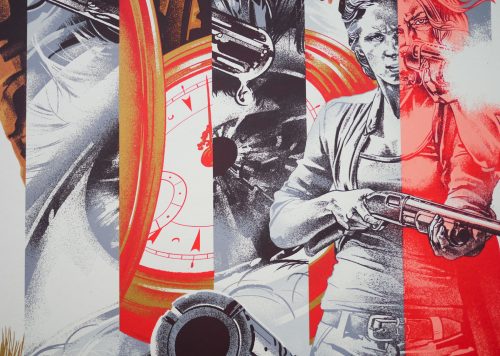 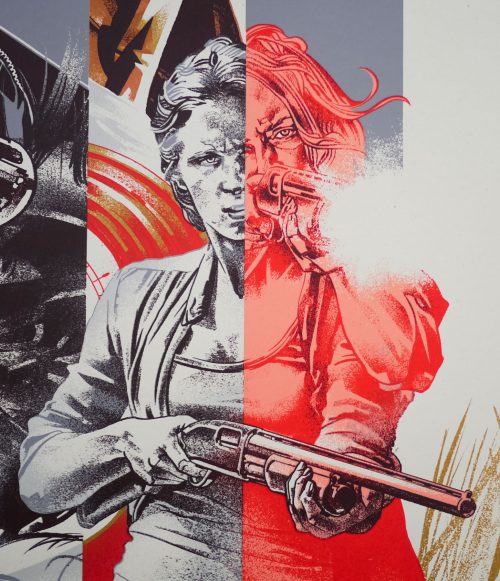 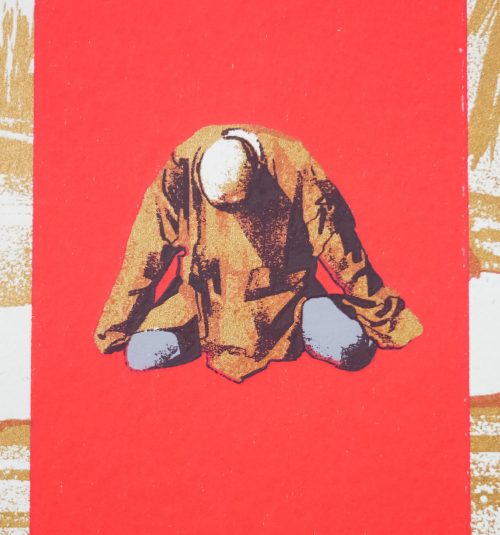 A striking design by the artist Martin Ansin features on this official screen print for the 2012 sci-fi film Looper. Written and directed by Rian Johnson, creator of the superb ‘Brick’ (2005), the film is a futuristic, somewhat dystopian crime-drama based around the theme of time travel. Looper is set in both 2044 and 2074 and stars Bruce Willis and Joseph Gordon-Levitt as the same character from each era, with the latter made to look uncannily like the former thanks to the skills of makeup artist Kazuhiro Tsuji. The audience learns that time-travel was invented in 2074 but then immediately outlawed. Because the tracking of individuals is so advanced and accurate, enterprising criminal gangs begin using the technology to dispose of victims they want disappeared.

These individuals are sent back in time 30 years and killed by the titular loopers who are paid in silver bars strapped to the victims. Eventually, however, all loopers must accept that they too are sent back in time to be killed by their younger selves. They are sent with reward of a packet of gold bars strapped to them and this moment known as ‘closing the loop’, is intended to stop the future authorities seeing a link to the use of time-travel. Young Joe (Gordon-Levitt) discovers that his flat-mate Seth (Paul Dano) failed to close his own loop because his older self warned him of a mysterious figure in the future known as the Rainmaker who has begun to overthrow the crime bosses and is murdering each of the loopers one by one. Joe reluctantly agrees to help his crime boss Abe (Jeff Daniels) track down Seth and close the loop.

One day Joe comes face to face with his older self and the older Joe (Willis) manages to overpower his younger self and he escapes. Older Joe is determined to kill the Rainmaker when he was just a child and young Joe discovers the target is a young child called Cid (Pierce Gagnon) who lives on a remote farm with his mother Sara (Emily Blunt). Sara confides that Cid has advanced telekinetic powers and that the young boy is barely able to control them when he gets angry. Soon, Abe’s henchmen come looking for young Joe and he must try to survive whilst also protecting Cid from older Joe and attempting to stop him from fulfilling his destiny as the Rainmaker.

Johnson also introduces an alternative timeline in which young Joe kills his older self before he can escape but then shows how the timelines are then ingeniously linked together. The film was met with great critical acclaim and performed brilliantly at the box-office, with takings several times the original production cost. Some recent reviews on IMDb have been pretty brutal and unforgiving of what are perceived to be plot holes focused around the time travel concepts, but the director himself has since explained that the film was never intended to get too focused on the technicalities of how it works:

‘Even though it’s a time-travel movie, the pleasure of it doesn’t come from the mass of time travel. It’s not a film like Primer, for instance, where the big part of the enjoyment is kind of working out all the intricacies of it. For Looper, I very much wanted it to be a more character-based movie that is more about how these characters dealt with the situation time travel has brought about.’

This screen print was commissioned by the limited edition poster outfit Mondo for a screening of the film at the 2012 Fantastic Fest in Austin, Texas. It was created by the talented Uruguayan designer and artist Martin Ansin, whose work has graced many of the best posters released by Mondo, including several in the Universal Monsters series, like this amazing Phantom of the Opera one. This design for Looper cleverly captures the time travel concepts and the two versions of the lead character.  The artist also worked on a variant of the poster that features a silver colourway.