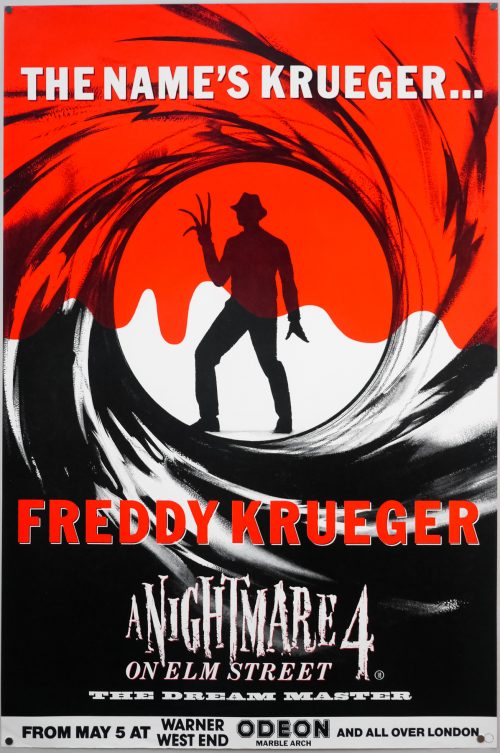 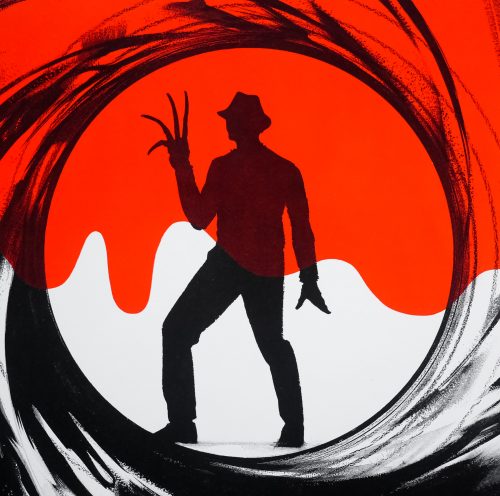 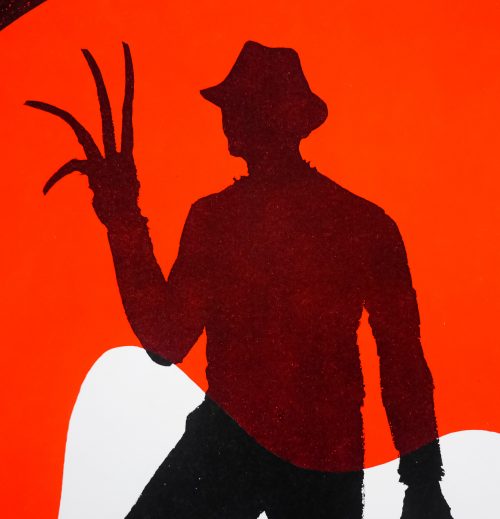 When the fourth film in the ‘A Nightmare on Elm Street’ franchise (subtitled The Dream Master) was released in the UK it happened to be up against the latest James Bond entry, Licence to Kill, at the box office. Palace Pictures had been handling the British distribution of the horror franchise since the first film and had worked with the same artist, Graham Humphreys, to produce unique poster designs for the market. When it came to promoting The Dream Master Graham produced a unique quad for use in cinema lobbies and on billboards, but he also had the idea of creating a small run of double crowns that spoofed the iconic James Bond gun barrel opening sequence created by Maurice Binder and first seen in Dr No (1962).

When I interviewed Graham in 2011 for this site he explained how that came about and where the poster was used. Here’s an excerpt:

So it was often the case that you wouldn’t know what it was going to look like until you printed it?
No, everything was an experiment. This poster could have been so much different as well though. The stained glass from the final scene in the church was good for me because it was a lovely device that meant I could use the large silhouette [of Freddy]. I also thought it was interesting because at that point the face was so familiar so we could take it dark again; we know who he is. We also did the cheeky James Bond spoof poster.

Ah, you were involved with that?
I was, it was my idea.

For folks who haven’t seen it it’s the classic James Bond silhouette from the title sequence where he shoots and the blood drips down, but with Freddy in Bond’s place. The tag-line is ‘The name’s Krueger…Freddy Krueger’. There was some talk of that poster being withdrawn?
It was, within a week. The new James Bond film was about to come out and that was why we did it anyway. They’re very protective of that image, of course, and they said they’d sue if we didn’t take it down. It was fly-posted on the underground for a little while. I’d gone to the folks at Palace and said I’ve got this great idea for a teaser for Elm Street 4 and brought along a VHS tape [of a Bond film] which I put on and freeze-framed at that moment where he turns around and fires the gun. They said ‘great!’ and that was that.

Was that always the case with Palace, that they’d be happy to try things like that?
Oh yes, completely.