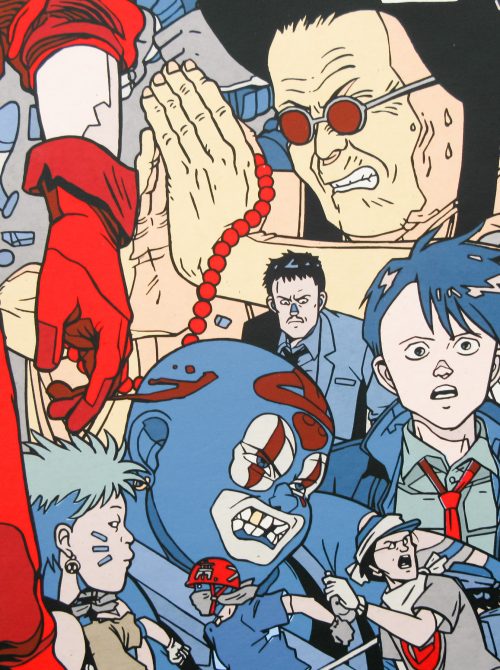 Tagline
Neo-Tokyo is about to E.X.P.L.O.D.E.

Katsuhiro Otomo‘s landmark anime, based on his own manga of the same name, was chosen by the artist Tyler Stout to be the first in a series of ‘Mondo Mystery Movies’; one-time-only screenings of a mystery film organised by the crew at the incomparable Mondo Tees. After the screening those in attendance are able to purchase a screen print by a mystery artist who is only revealed at the end of the film.

The 9th MMM has just happened and those lucky enough to secure a ticket were treated to a showing of George Romero’s classic Dawn of the Dead in a mall surrounded by 200 zombies with the man himself in attendance. Here’s a recap of the event on Collider.com.

Because the poster is exclusive to the showing and never sold on Mondo’s website it’s pretty much impossible for collectors who were unable to attend the screening to get hold of it, unless they’re willing to scour sites like eBay and accept the significant mark-ups in price that come with a second-hand purchase.

I had pretty much given up hope of ever getting hold of Akira, but after purchasing another print from Tyler’s website I opened the tube to find that he’d also included a regular version of Akira in there. Apparently he’d treated a few lucky folks to the copies of the print he’d been given by Mondo after the event, which gives you some idea of the kind of guy Tyler is.

I recently emailed him to ask him a few questions about the print so that I could add them to this site and the resulting interview can be found on this blog page, along with a few exclusive images from the creation of the poster.

There was also a variant of the poster (80 printed) with metallic inks and a different colour scheme that can be seen on Expresso Beans.

Akira had a huge impact on me when it was shown on the UK’s Channel 4 sometime in the early 1990s. I’d never seen anything quite like it and it opened my eyes to the world of anime films that were slowly being released in the UK, including the likes of Ninja Scroll, Ghost in the Shell and the great work of Hayao Miyazaki and his Studio Ghibli.