A Fistful Of Dollars / screen print / Heads of State / USA

Guardian Of Hell / one sheet / USA

Tagline
IT HAS AWAKENED!

Doomed To Die / one sheet / USA

Tagline
They have a never ending hunger for human flesh | The most violent human sacrifice you'll ever see!

This version of the US one sheet was actually used for non-theatrical 16mm screenings, hence the text along the bottom. There are also a few other differences to the regular one sheet, including the hue of the background. 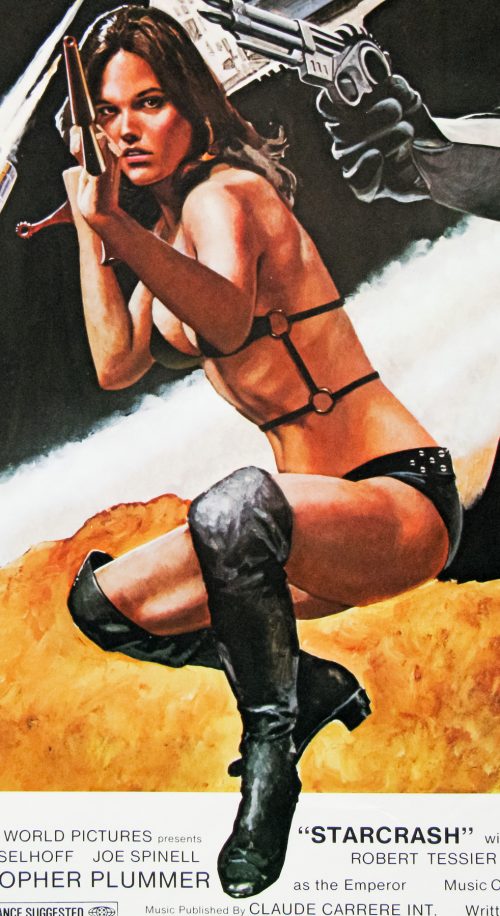 Tagline
From a vast and distant galaxy... A Space Adventure for all Time!

This American one sheet for Starcrash, Luigi Cozzi’s 1978 Star Wars ‘homage’, has excellent artwork by John Solie, featuring Caroline Munro as the superbly monikered Stella Star. Critically panned on release, it has since gained cult status thanks to the camp script and infamous special effects. It was recently re-released on blu-ray under the ‘Roger Corman Cult Classics’ series. The film also features a score by the late John Barry – I like this bit of trivia on IMDb.

Check out the original trailer on YouTube (edited by the great Joe Dante) and bear witness to the quality of the effects.

Director Eli Roth has recorded a commentary to the trailer on the Trailer From Hell site.

Once Upon a Time In America / one sheet / USA

Tagline
As boys, they made a pact to share their fortunes, their loves, their lives. As men, they shared a dream to rise from poverty to power. Forging an empire built on greed, violence and betrayal, their dream would end as a mystery that refused to die.

This one sheet was designed by the American designer and artist Tom Jung, who is probably best known for the Star Wars style A one sheet. A reader of the site got in touch to confirm that Jung used this still photograph by the on-set photographer Angelo Novi as the main image on the poster.

In 2012 I visited the same street in Brooklyn that leads down to the Manhattan Bridge and is featured in the film and on this poster. I took this picture, which gives you an idea of how the street looks today.

The Departed / one sheet / advance / USA

Tagline
Cops or Criminals. When you're facing a loaded gun what's the difference?

Tagline
A New Dimension In Terror...

Gleaming The Cube / one sheet / USA

Tagline
All he cared about was Gleaming the Cube...until the night they killed his brother.

Tagline
The Night He Came Home!

Type of Poster
one sheet