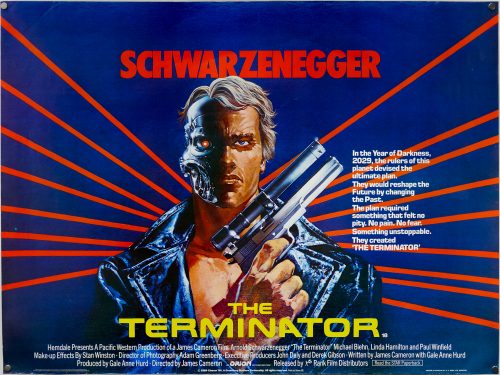 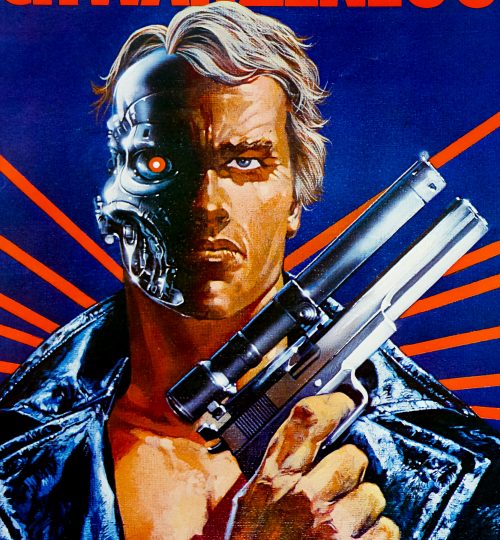 Tagline
In the Year of Darkness, 2029, the rulers of this planet devised the ultimate plan. They would reshape the Future by changing the Past. The plan required something that felt no pity. No pain. No fear. Something unstoppable. They created 'THE TERMINATOR'

James Cameron’s seminal sci-fi classic The Terminator was given a unique poster design when it was released on these shores in January 1985. The US poster had featured the iconic photograph of Arnold Schwarzenegger alongside the lengthy tagline (that also appears on this quad), but the decision was taken to go with a painted portrait of the actor, which also features a depiction of the robotic endoskeleton underneath the Arnie exterior.

The person responsible for the image on this quad was the British artist Mike Francis. Whilst putting together the must-own book British Film Posters, Sim Branaghan met and spoke to Francis about his life and career and, as always, I heartily recommend picking up the book to read the section in full. Born in Surrey in 1938, Francis got his first job in commerical art in the early 1950s at the Rome Studios in Soho, London. Starting out as a messenger boy he began to be given illustration jobs and after a stint as a National Serviceman he returned to the studio in 1958 to a welcome pay raise and an increase in illustration work.

Mike stayed with Rome Studios until 1970 when he left to join Illustrators of London on Great Marlborough Street and this is where he was given his first film posters to work on. His first quad was for the 1971 version of Black Beauty and he also worked on posters for Hammer and other independent companies. In 1974 Francis won the National Gallery’s 150th Anniversary Award, and with the prize money he took the decision to go freelance. Although film posters were only a small part of his overall output (he estimates he was doing a couple per year) he continued to paint for film-related studios such as Downtons and some of his other quads include The Karate Kid (1984), Not Quite Jerusalem (1985) and The Holocroft Covenant (1985).

By about 1990 the illustration work had dried up completely but Francis had been painting highly finished photorealist work for many years and this side of his career had taken off significantly with high-profile exhibitions and celebrity clients. However, in terms of film work there’s no question that this painting for The Terminator is the artist’s most iconic work.